Surveillance cameras in a Moscow subway caught the moment a man was shot in the face at pointblank range on Nov. 17. 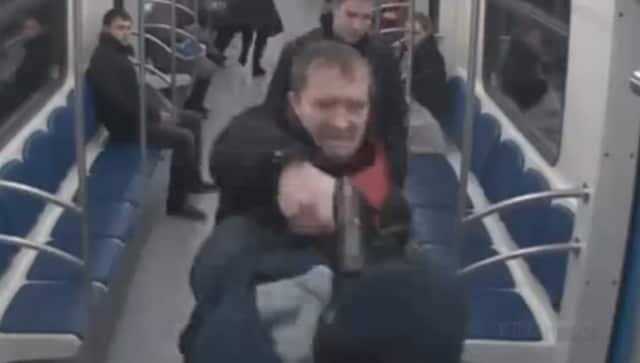 An unidentified man shoots Latipov in the face at point blank range.

While riding on the Moscow metro, 30-year-old Khashim Latipov suffered serious gunshot injuries. Latipov “locked eyes” with two unidentified men and mayhem quickly unfolded. The victim was shot once in the stomach, kicked and then shot again in the head, the The Daily Mail reports.

Latipov described the terrifying ordeal in an interview with gapp.az, claiming the brutal attack was unprovoked.

“We just locked eyes,” Latipov said. “I turned away, but he kept looking. And it was such a contemptuous look. He looked like a psycho, like he wanted to kill someone. I was sitting there and I asked him, ‘What are you looking at?’ He immediately exchanged a few words with his friend. When I approached them, he stood up, silently took out a gun and started shooting.”

According to Radio Free Europe Radio Liberty, the pistol used in the attack was a “trauma gun– a type of air pistol that is popular in Russia and often used for self-defense purposes.”

Latipov faces serious but non-life-threatening injuries from the wounds sustained to his upper jaw and stomach.

Police have yet to identify or apprehend the two suspects.