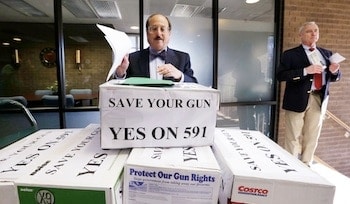 Washington gun-rights activists submitted to state officials more than 340,000 signatures on Thursday in support of Initiative 591, a measure that seeks to safeguard the Second Amendment rights of law-abiding citizens.

More specifically, I-591 also known as the “Protect Our Gun Rights Act” would prevent Washington State from adopting background-check laws more restrictive than the federal standard.

The current federal standard makes it is illegal for one to sell a firearm to someone they know to be a felon or a person prohibited from owning a firearm.

Additionally, the initiative would prohibit any confiscation of firearms without due process.

Under I-594, gun owners and prospective purchasers would be required to go to a federally licensed gun dealer when transferring a firearm. The FFL or the gun shop owner would run the background check for the prospective buyer/transferee.

Back in October, gun-control advocates submitted several hundred thousand signatures in support of I-594. This week, gun rights supporters responded by dumping off 13 boxes of signatures, tagged “Save your gun. Yes on 591.”

“While signatures are still coming in,” said Alan Gottlieb, chairman of the Citizens Committee for the Right to Keep and Bear Arms, “we have reached our first major goal and it is now time to submit the petitions we have.”

“This has truly been a grassroots endeavor,” Gottlieb said in a press release. “We’ve conducted our signature drive for about half to two-thirds of the amount raised and spent by supporters of a Draconian 15-page gun control measure that, under the guise of background checks, will create a costly bureaucratic and grossly unfair process that includes an unfunded mandate.

“We believe voters are smart, and deserve a choice,” he added. “That’s why there is widespread support for our initiative across the state.” 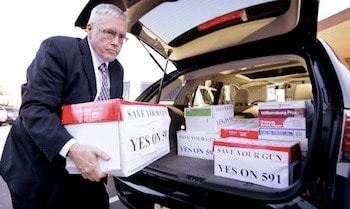 So long as both groups collect 325,000 valid signatures of registered voters, the state-recommended benchmark to surpass the bare-minimum certification requirement of 246,372 signatures, which it appears they already have, then the initiatives will go before the Legislature, where lawmakers could do one of three things, as the Associated Press pointed out: “They could vote on the measures, and the measures would appear on the November ballot if they don’t pass; they could take no action, meaning the initiatives would go straight to the ballot; or they could recommend an alternate measure to run alongside the initiatives on the ballot.”

At this point, it’s unclear how the Legislature will receive I-591 and I-594. Though, earlier this year, state lawmakers did review a measure that was less stringent than I-594. That universal background check measure, which included certain exemptions for concealed carry permit holders and law enforcement officers, failed to clear the House and Senate.

I-594, which is more stringent than what lawmakers had been discussing, does not contain any exemptions, as it states, “The initiative is simple: it makes sure that anyone buying a gun in Washington State passes the same background check, no matter where they buy the gun and no matter whom they buy it from.”

This is certainly a sticking point for gun-rights advocates who believe that selling a firearm to a friend or neighbor should not involve the hassle of going to an FFL.

“Gun prohibitionists have been waging a war of disinformation and semantics,” Gottlieb explained. “They would have the public believing that there currently are no background checks, and that we must set up special requirements in Washington State, which is nonsense. We have federal and state checks in place, and we are going to protect those procedures with I-591.”