‘I have a bigger one than you,' store clerk told robber who promptly fled (VIDEO) 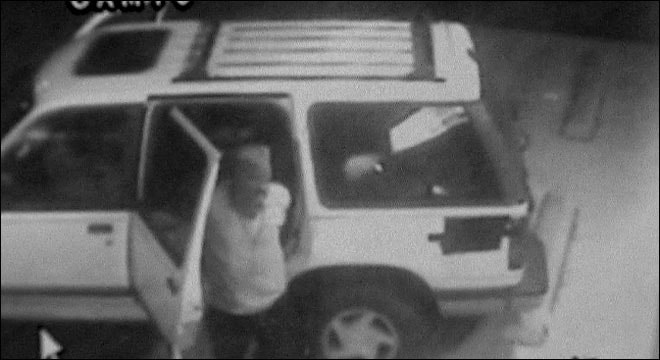 Moore hopes area residents will keep an eye out for the SUV, which is described as a white older model Ford Explorer with what appeared to be black tape on both sides near the back by the tail lights. It also has a roof rack and a sunroof. (Photo credit: Komo News)

Usually when one man says to another, “I have a bigger one than you do,” a specific part of the male anatomy is implied, but that wasn’t the case Saturday night when a West Seattle store clerk made that statement to a would-be robber.

It was about 10 o’clock when Robert Moore was ringing up a customer and two men wearing ski masks entered the store. According to a Komo News, one of the men stood at the door while the other, armed with a gun, approached Moore, pointed the gun at him and proclaimed, “This is a robbery.” A third suspect waited in an SUV parked outside.

However, Moore told reporters that the gun the would-be robber was holding did not look real.

“I looked at his gun,” Moore explained, “and said ‘I have a bigger one than you do.’” The clerk then reached for his revolver and chased the suspects away as they ran out of the store and fled in the SUV.

This wasn’t Moore’s first time to deal with robberies in the store either, which is one reason he keeps not one, but two guns behind the counter.

No shots were fired during the incident and no one was injured. Moore and the customer were the only ones in the store during the attempted robbery and apparently the stunned customer wasn’t even sure that the robbery was real.  Moore said when the would-be robbers walked in, the confused customer asked the clerk, “Is this real?” To which Moore replied, “Yes, I think it’s real.”

The entire incident was captured on the store’s surveillance video. When officers arrived, they searched the area for the SUV and the suspects, but no traces of either were found.

After hearing about the robbery scare and the way it ended, customer Rich Morris told reporters, “Wow, good for Bob.” Adding, “It’s a good place and Robert’s so great to the locals and stuff like that. It’s just a shame when people get desperate like that.”