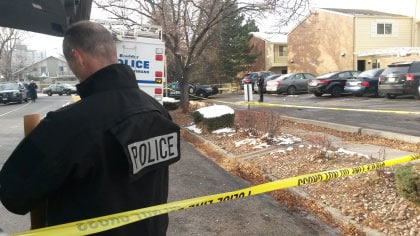 Boulder police officials back the actions of an officer who shot and killed a suspect while responding to a domestic disturbance call Sunday afternoon. But the suspect’s father is calling the officer’s actions anything but justified, the Denver Post reports.

“He had knives, they had rifles. That’s murder,” the father said, declining to comment any further.

Police first received a call Sunday morning when the mother of the suspect’s girlfriend was concerned that her daughter, Kirsten Stenseng, might have been in danger. Officers arrived to the suspect’s condo where Stenseng informed them that “nothing had happened.” The officers determined that no crime had been committed so they left.

Later that afternoon, police received another call, this time from a neighbor saying the suspect, who was later identified as 42-year-old Michael Habay, was outside yelling and throwing things out of the apartment and that he was armed with two knives, “stabbing a post” outside. He also believed that Stenseng was still inside the man’s apartment.

Officers returned to Habay’s home, where Stenseng’s car was still parked outside. They knocked on the door several times, but received no response. Fearing that Stenseng might be in danger, officers forced their way through the front door. At that point, Habay, wielding a knife in each hand, charged at the officers, forcing one to deflect the suspect with a ballistic shield.

At least one report also indicates that, according to the BPD, Habay was wearing “body armor, the type one might wear for dirt bike riding or paint ball games … shoulder pads and a breast pad, elbow pads and shin guards on. He was also wearing furry Ugg boots.”

Officers yelled at Habay to “get down” and “drop the knife” but he did not comply.

Habay then ran past the first officer towards Officer Vincent Gallerani, who thought that the other officer had been stabbed and Habay – still holding the knives that were pointed towards the officers — was about to stab him as well. He fired three shots at Habay, hitting him at least twice.

Habay was transported to a local hospital where he was pronounced dead. 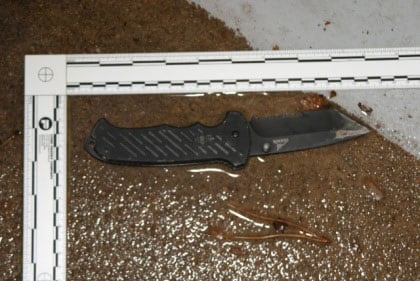 One of the knives held by the suspect during the confrontation. (Photo credit: Boulder Police Department)

Officers later found Stenseng in a different apartment. There was no report of her being injured.

Additionally, police discovered that Habay had made threatening comments on social media directed towards Stenseng, even threatening to kill her. One neighbor also told reporters that the couple has had several violent confrontations in the past. In fact, Boulder spokeswoman Sarah Huntley confirmed that police were called to the residence over the summer for a domestic dispute, but did not offer any details. 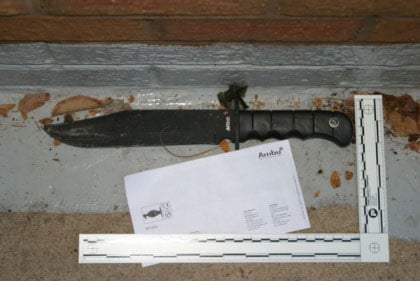 One of the knives held by the suspect during the confrontation. (Photo credit: Boulder Police Department)

As is standard procedure, Gallerani, who is a 14-year veteran, has been placed on paid leave while the incident is investigated. Ultimately, the Boulder District Attorney will decide if any charges will be filed against Gallerani.

“It is always unfortunate when an officer has to use deadly force and it is a very emotional experience for any officer who is put in this situation,” Boulder Police Chief Mark Beckner said. “We are very thankful none of our officers were injured by this attack. Additionally, our condolences go out to the suspect’s family for their loss. From what we know right now, it appears as though the officers took reasonable measures to protect everyone’s safety, but were forced into a very difficult and life threatening situation.”

The weekend shooting was the first officer-involved shooting in Boulder in five years.