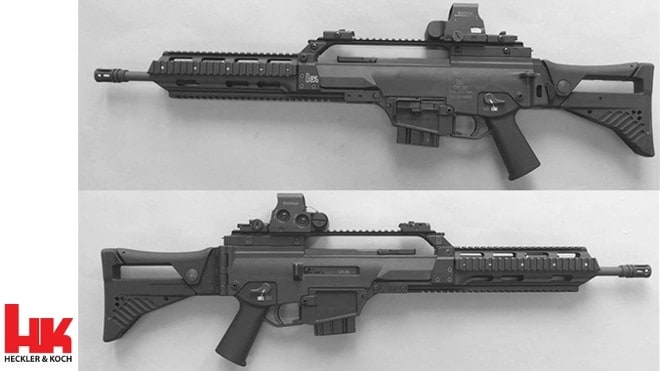 It is up to the German federal police to determine if the changes to the new designs are adequate in preventing users from easily modifying the gun to restore its select-fire capability. Heckler & Koch’s commercial offerings must be semi-automatic only before they can put their products on the market.

The demand for this rifle will be massive, for sure in both Germany and the U.S. Frequently portrayed in movies, television and video games, the gun has developed a cult following. Its unique, futuristic appearance, use in media and by the German military and its total unavailability to the masses has all contributed to the gun’s prestige.

Heckler & Koch has many halo products but a commercial variant of the G36 will raise the company’s bar. H&K is working on a series of different models to be sold under the name HK243 in German and HK293 stateside. 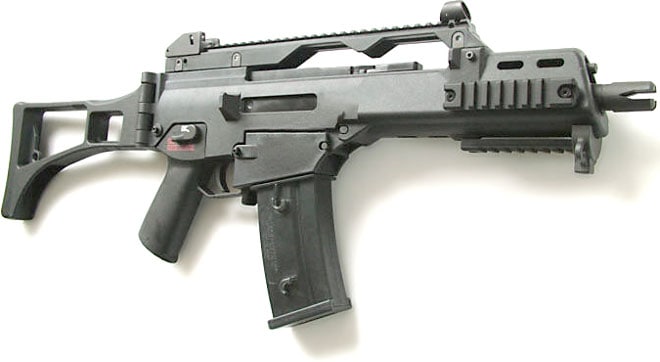 From the photos the new pattern appears to have an updated buttstock design and magazine well (top photo) — it may use standard .223 Remington/5.56 NATO AR-15/M16/M4/STANAG magazines, which would greatly contribute to its marketability.

So far this is just a first step and there will be many to follow before H&K will be able to bring the HK293 to the U.S. It would be surprising if they are able to offer it by 2014. While this is promising, there is more to be done.

After H&K’s submission clears, assuming it clears, they still have to deal with import restrictions here. The ATF has traditionally blocked rifles like these — semi-automatic consumer versions of military rifles — from being imported. Should the ATF decide that the HK293 has sporting purposes it will be the greatest reversal in position the agency has ever made (although H&K fans would point out that this is a very special rifle, after all).

This means that H&K will have to manufacture them here in the U.S., which they probably expect and have planned to do, using a combination of German-made and American-made components.

But unless they have HK293 tooling up and running in their domestic Georgia facilities the day they’re allowed to leave Germany, there will still be a wait to get these into manufacture after the German federal police give the plans the green light.

But a wait is a small price to pay in the long run, and well worth it for Heckler & Koch and their many devoted users.

If you would like to see H&K’s proposal to the German federal register it can be found here.