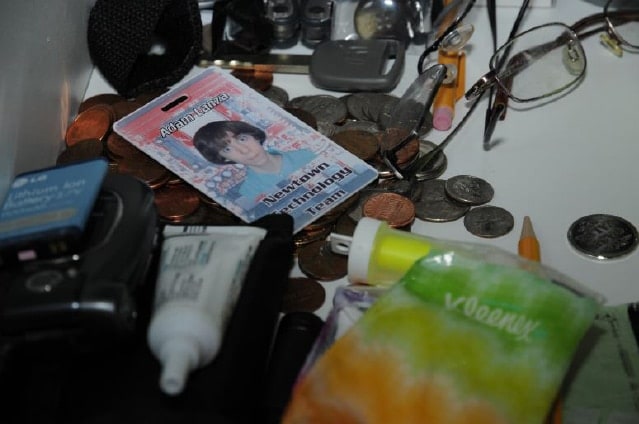 Clutter inside a bathroom of the Lanza home.

The State of Connecticut released a report yesterday detailing previously unreleased information about both the shooting at Sandy Hook Elementary School and the shooter. While most of the report simply refines and reiterates details listed in initial reports, it also offers some insight into the shooter’s deranged psyche though little explanation as to why he gunned down 20 first-graders and six educators.

Citing 29 documents, also released yesterday, investigators determined that the shooter, 20-year-old Adam Lanza, acted alone. After reviewing his mental and social background, they determined that there were no red flags that would have legally identified him as a potential threat.

Lanza was socially awkward and had little to no interaction with anyone except his mother, according to the report. But his relationship with his mother was somewhat strained. Even though their bedrooms were right next to each other on the second floor of their house, Lanza preferred to talk to her via email.

Although he was closest to his mother, sources say that he seemed to have had no real emotional connection with her — something even Mrs. Lanza acknowledged. She described her son to friends as having no emotions or feelings, and was incapable of empathy. In addition to her observations of his anti-social behavior, Lanza was diagnosed with Asperger’s Disorder in 2005. Specific emotional and psychological issues were also identified, but never properly treated while he attended school or after he graduated in 2009.

The front entrance to Sandy Hook Elementary School after the shooting.

A toxicology report determined that Lanza had no alcohol, drugs or any medications in his system at the time of the shooting. In fact, the report states that he hated the thought of ingesting any substances for treatment or otherwise. He also refused behavioral treatment.

Leading up to the shooting on Dec. 14, 2012, Lanza was like a ghost. His mother told friends that she was concerned because he hadn’t left the house for three months.

Before that, starting somewhere around June 2011, Lanza’s only way of socializing was playing the video game “Dance Dance Revolution” at a local movie theater. “DDR” was a popular game in the early 2000s, requiring players to dance to music, hitting certain steps at a certain pace. An acquaintance from the theater told investigators that Lanza would play the game for 4 to 10 hours on the weekends.

Also, the report states that Lanza would visit a shooting range with his mother, an activity she saw as a way for them to bond. Occasionally Lanza’s older brother would join them.

While the report suggests that Lanza’s mother was concerned about her son’s anti-social behavior, investigators have determined that she did not realize he was dangerous. However, when investigators searched his room they found evidence that suggests he had an obsession with mass shootings, particularly Columbine.  For example, investigators found a collection of news clippings of more recent shootings and a spreadsheet on his hard drive detailing mass murders over the years.

But probably the most chilling item found inside Lanza’s bedroom is a spiral-bound booklet he wrote when he was in the fifth grade. Although the story was written nearly a decade before the shooting at Sandy Hook, the horrific acts that unfolded inside that schoolhouse mirror details listed in his fiction. 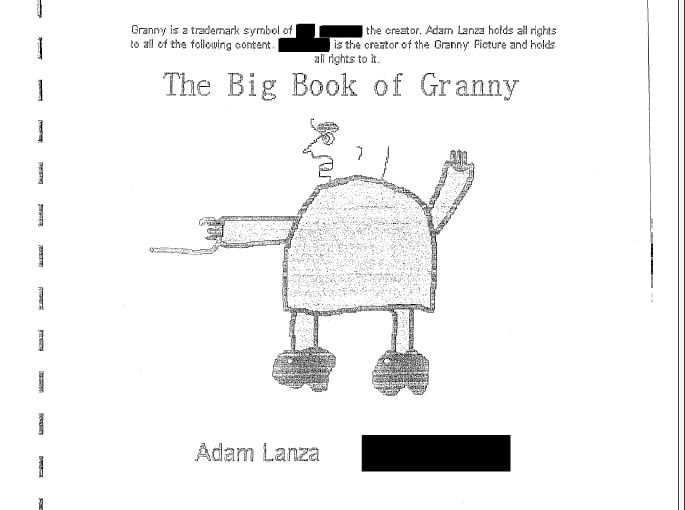 The book written by the shooter in the fifth grade.

According to the report, Lanza, and an artist whose name has been redacted from the report, wrote “The Big Book of Granny,” a story that includes numerous scenes of random violent outbursts and mass shootings.

Armed with a cane gun, the character “Granny” is behind the murder of children, a hockey player, a soldier, several animals and even The Beatles. The story is riddled with unsettling dialogue such as “Remember last time when everyone was slaughtered? Well… You bread-brain leeches gave me 75 years of prison for that so called “Tragedy!” I was having fun!”, “Hide and go die,” and “I like hurting people … Especially children.”

In a handful of scenes, Granny has an accomplice by the name of “Granny’s Son,” who actually murders her in two different chapters. In one scene he blows her head off with a shotgun, and the second he drowns her in the ocean after she falls off a boat.

Investigators don’t know if the booklet was turned in for a grade.

While the short story and the list of items from inside Lanza’s bedroom offer some insight into his personality and the report as a whole explains what happened, investigators have failed to explain why it happened.

In terms of a motive, the best thing the author of the report, State’s Attorney Stephen Sedensky, could provide is that Lanza went too long without treatment for his mental illness, it had gotten to a dangerous point, he was obsessed with mass murder and had easy access to firearms.

While Lanza had ties to Sandy Hook, they were not recent. As Sedensky explains, Lanza probably chose Sandy Hook Elementary School because it was close to his house.

“With the issuance of this report, the investigation [into the Sandy Hook shooting] is closed. … As of now, there will be no state prosecution of anyone as an accessory or co-conspirator,” Sedensky wrote in the concluding section of the report.