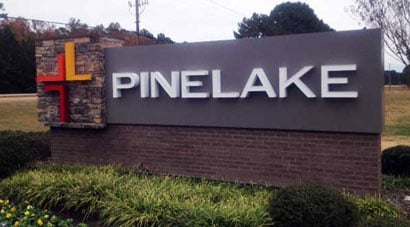 Churchgoers were startled by gunfire after singing hymns Sunday morning when the man’s gun accidentally went off. (Photo credit: WDAM)

A man accidentally discharged his firearm during church service Sunday morning in Flowood, Mississippi. Although the church prohibits guns on the property, state law allows the man to legally carry into the church because he possesses an “enhanced concealed carry permit.”

According to local reports, the church congregation had just finished singing hymns and was being seated. But as Joseph Ray sat down, the 9mm pistol stored in his front pocket accidentally went off. The bullet penetrated the concrete floor, but no one was injured. However, the casing bounced off the floor and hit a woman sitting nearby.

Flowood police responded just after 8 a.m. and Ray was taken into custody but later released. However, Ray, who is described as an “upstanding guy,” will still face charges and is due in court Jan. 9.

Flowood Police Detective Sgt. Billy Tucker said, “We went with what we felt like was appropriate at the time, to set precedence. It was discharging a firearm in city limits.”

However, the church also has the legal right to press charges against Ray, but church leaders indicated that they would take no such action against the long-time church member. Nonetheless, if the church did pursue charges, they wouldn’t even be gun-related but most likely trespassing charges. The reason for the lesser charges is Ray has an enhanced carry permit, so he is legally allowed to carry onto church property.

In the state of Mississippi residents have the option of applying for an enhanced concealed carry permit or a training endorsement license, as it’s sometimes called. The enhanced permit is obtained by attending a special Mississippi Department of Public Safety-approved training course and paying a $132 fee. The special permit allows holders to carry in places where firearms are otherwise prohibited – including places of worship.

According to the statute, which was passed in 2011, a person who possesses an enhanced permit is authorized to carry a concealed firearm anywhere in the state – even if a “firearms prohibited” sign is displayed — except in courtrooms during a judicial proceeding, any police, sheriff or highway patrol station, any detention facility, prison or jail or a place of nuisance. A place of nuisance is defined as a place which lewdness, assignation or prostitution is conducted, permitted, continued or exists, a place in which a controlled substance is unlawfully used, possessed, sold or delivered.

But even with the enhanced permit and extra training, Tucker reiterated that accidents like Sunday’s simply fall back on safety. “If you are toting a weapon you need to be safe with it. You need to have it properly secured,” Tucker said, noting that Ray’s firearm was not in a holster.

“When you get lax, that’s when accidents happen,” Tucker added. “Unfortunately there was an accident but fortunately no one was injured this time.”

Flowood Police Department Lt. Ricky McMillian echoed Tucker’s attention to safety. “The whole thing we’re trying to get people to understand. We’re an open carry state and we do have the carry permit for concealed. If you’re going to carry one, you need to be responsible. You know, practice good gun safety. Make sure it’s in a holster and stuff like that,” McMillian stated. “Because once that bullet leaves that barrel, you can’t bring it back.”