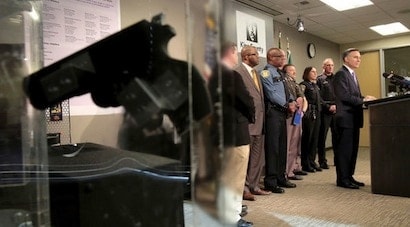 Called the ‘Safe Storage Saves Lives Campaign,’ gun owners receive 10 to 15 percent off on gun locks and safes when they mention “Lok-it-up” or “public safety” at participating retail outlets.

The initiative is being spearheaded by King County Executive Dow Constantine and Sheriff John Urquhart and the offer is good throughout the duration of the holiday shopping season, from Nov. 25, 2013 through December 2014.

“It’s time for lockboxes and storage cases to be as common as seat belts,” Sheriff Urquhart said at a Monday press conference where they unveiled the campaign, the Seattle Times reports.

The announcement comes on the heels of a report that contained some alarming statistics about gun-related violence in the area:

During the 2011-2012 school year, the Washington Superintendent of Public Instruction reported 84 incidents involving a firearm on school premises, transportation systems, or school facilities.

In 2009 an estimated 5,800 King County children lived in homes where firearms were stored loaded and unlocked.

A study found that 49% of households with adolescents only (aged 13-17 years) stored a firearm unlocked versus 29% of those who also had younger children (aged 0-12 years).

“What if 17 percent of children were not in car seats,” Bothell Police Chief Carol Cummings said to the Seattle TImes. “Would that be okay?”

Cummings noted that the campaign is “not saying anything about the Second Amendment. But with rights come responsibilities.”

It also appears that gun rights advocates do not have a problem with the campaign either.

“It’s voluntary, so it’s perfectly fine with us,” said Alan Gottlieb, of the Citizens Committee for the Right to Keep and Bear Arms, although he expressed some concern for not receiving a heads up about the campaign before its launch.

In the past, lawmakers have tried to pass state-wide safety requirements, such as mandatory trigger locks and safety training for gun owners as well as other bills to criminalize leaving an unsecured, loaded firearm in household where a child could access it.

However, these measures failed either at the ballot box or stalled in the state legislature.