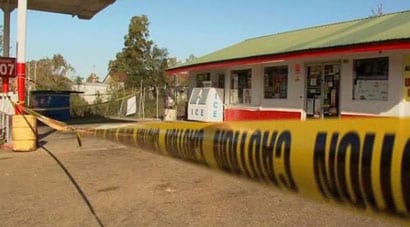 The robber had already collected some of the store’s cash, but decided to go back for the rest he left behind – a decision that would prove fatal for him. (Photo credit: WDAM)

A convenience store owner was shot during a robbery on Nov. 11 in Bassfield, Mississippi, but then turned the tables and opened fire on the robber shooting him at least 10 times.

It was in the early morning hours when the suspect, armed with a gun, walked into the Get and Go convenience store and demanded the clerk hand over the store’s cash, WDAM reports. But before the clerk could collect all of the cash, the robber shot the clerk in the leg.

The suspect then left the store, but apparently got greedy and decided to return moments later to grab the rest of the cash that was left behind. However, the suspect’s greediness would prove to be a fatal flaw.

Within those moments that the suspect walked out of the store, the clerk was able to retrieve his 9mm handgun, and when the robber walked back inside, the clerk opened fire. When officers arrived, the suspect was pronounced dead at the scene.

According to Jefferson David County Coroner Jimmy Slater, the suspect, identified as 35-year-old LeRobert Young of Bassfield, had 11 to 13 gunshot wounds.

The store clerk was transported to a local hospital where he underwent surgery and is expected to make a full recovery.

No charges are expected to be filed against the clerk.

The Get and Go convenience stores are a part of the Giant Eagle family of stores and although it is unknown if the company has a no weapons policy like many larger national chains, according to Buckeye Firearms Association of Ohio, the Giant Eagle stores – at least those in the state of Ohio — have removed signs which prohibit firearms.

With several recent stories in the news of store clerks who pulled a gun on would-be robbers, only to be fired for violating their company’s no weapons policy, perhaps this will be one clerk who receives a pat on the back instead of a pink slip.