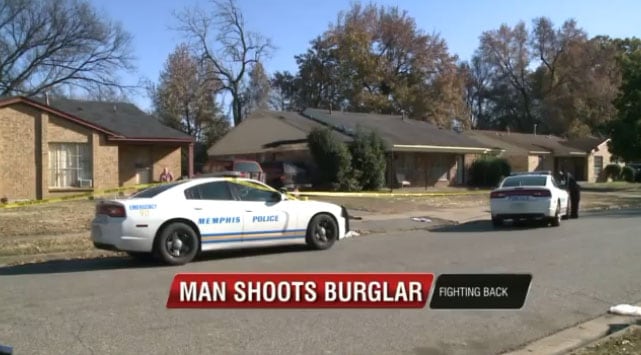 Residents say the Hickory Hill area has been a target for burglaries for years. (Photo credit: WREG)

A Memphis homeowner who came face to face with two suspected burglars during a home invasion last week put one in the hospital and sent the other fleeing, WREG reports.

Police said the homeowner called 911 when he heard someone smashing the glass of a back room window, but before officers could arrive, the two suspects were already inside the home. However, little did the suspects know that the man was not only home, but armed as well.

The homeowner shot at the intruders, hitting one, who was later found about a block away. The suspect was taken to a local hospital where he remains in critical condition.

The second suspect fled and authorities have yet to locate him. However, the only description available is that the man left the area wearing a black leather coat.

Audrienne Owens, who lives a few houses down, said the area, known as Hickory Hill, is no stranger to crime. She told reporters that on another occasion someone tried to break in through her back door during broad daylight. Although she thought the criminal activities were finally starting to let up, she knew she was wrong when her son came running to her around lunchtime the day of her neighbor’s break-in.

“My son said, ‘Momma I heard a gunshot’ and I’m like, ‘No,’ and he looked out and police were there,” Owens said.

Owens believes that the homeowner’s actions were justified.

“It’s your property, you should have the right to do it, cause you work hard for your things, you really do,” she said.

“It’s not you taking the law in your hands; it’s exercising your right as a citizen,” said another female resident who did not wish to be identified. “If you’re foolish enough to put your life on the line, I’m not. I want to live,” she added, also stating that her own gun is always loaded and she’s ready to protect herself.