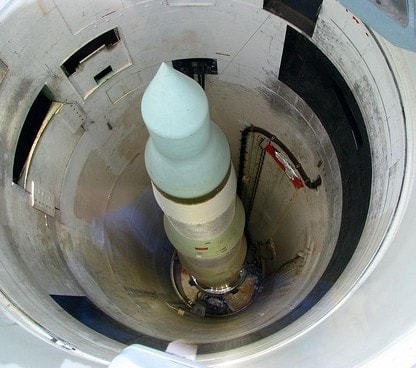 At the height of the Cold War, the U.S. wanted the capability to launch her nukes as quickly as humanly possible while still ensuring only authorized users had access to the weapons of mass destruction. In 1962, JFK enacted the National Security Action Memorandum 160, an act that equipped our nukes with a Permissive Action Link that added a much-needed digital barrier of security, Today I Found Out reports.

Slowly but surely, the military got to work carrying out the president’s orders. Secretary of Defense Robert McNamara oversaw the operation and according to Today I Found Out, he didn’t exactly make friends during the process. The Strategic Air Command resented McNamara and once the install was complete and he was out of the picture, the codes to all 50 nuclear missiles were set to 00000000.

That code is eerily reminiscent of Spaceballs.

But at least the PALs devices had been set up in America. Overseas, however, was a different story. Nearly 20 years after JFK’s order was given, half of the nuclear missiles in Europe still had yet to be outfitted with the new tech.

Recently, however, the PALs system has undergone a massive overhaul and since 2004, the “Code Management System” has been fully implemented, giving a significant boost to response times, according to Today I Found Out.

Also check out this awesome video of the Tsar Bomba, the most powerful explosive device ever created by humans.