As the MINIMI light machine gun closes in on its fourth decade of service, FN is rolling out a new wave up updates to the platform based on feedback from its users. The changes vary from small to large without altering the basic design.

The MINIMI is more commonly known in the U.S. as the M249 Light Machine Gun, formerly known as the Squad Automatic Weapon or SAW.

The latest MINIMI Mk3 will be offered in 5.56 and 7.62 NATO as before with a lot of changes, mostly ergonomics-based, with a significant number of retained common parts.

These changes are all a response to soldiers’ input, which speaks well of FN.

“The modifications introduced on the FN MINIMI Mk3 result from feedback provided by users engaged in current operating theatres,” explains the press release. “Indeed, the demands of users have evolved over the past 10 to 15 years due to changes in the way the FN MINIMI machine gun is used in combat (increased use of accessories, evolutions in the soldier’s equipment, and changes in tactics such as shooting from all positions).

“The new FN MINIMI Mk3 offers the users improved ergonomics and improved mobility while retaining the same core mechanism as the previous versions, for a limited impact on logistics.” 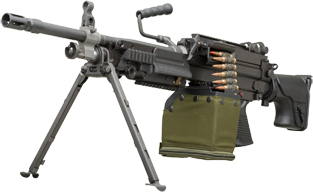 Because a majority of the changes require only a simple parts swap, FN will be working with MINIMI users to roll out the upgrades to existing light machine guns.

The Mk3 has a five-position adjustable buttpad for different lengths of pull in order to accommodate shooters of all sizes, with and without body armor. The buttpad also features a four-position cheek rest for use with optics of all types. The buttstock has a flip-up shoulder rest and an integrated hydraulic buffer to make carrying and shooting the machine gun more comfortable and controllable.

A completely redesigned handguard with an integral quick-release bipod, Picatinny accessory rails on the sides and bottom is also part of the update. The handguard can also be fit with a heatshield, which is optional, although many users would argue that it is necessary.

The cocking handle has been enlarged and redesigned for both left- and right-handed users and has a new locking latch to help prevent debris from entering the action.

Then there are some big changes. The new Mk3 uses a different barrel lock that allows the top cover to be closed without first having to re-install a barrel. It is not clear if the Mk3 uses new barrels as well. The feed tray has also been redesigned with pawls that index and retain belted ammo. This makes the Mk3 much easier to load one-handed.

The barrel system and feeding tray changes also allow the 7.62 Mk3s to use 5.56 barrels and ammo, making the new model more mission-adaptable (although the 7.62 model does weigh more) and if ammunition availability is an issue, much more flexible. The 5.56 Mk3 can’t be modified to accept the longer 7.62 cartridges, but it will be available with different barrel lengths for different types of engagements.

More details, specifications and photos can be found on the FN website.