NYC reported to be sending out ‘Surrender your guns’ letters 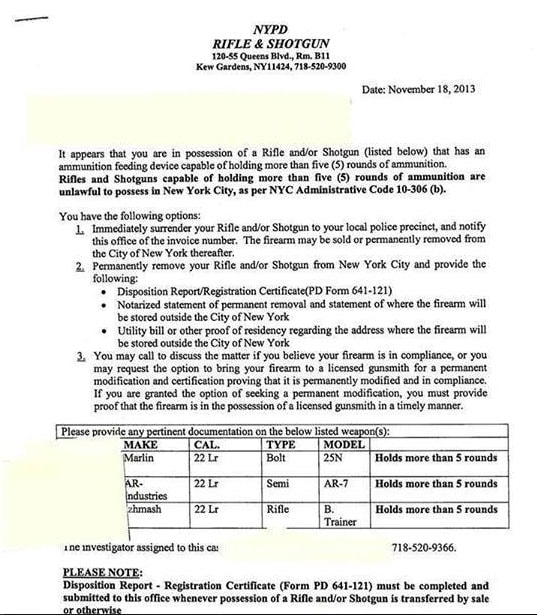 New York City has started mailing letters to residents requesting illegal rifles, shotguns and magazines either be surrendered, otherwise removed from the city or modified to hold no more than five rounds of ammunition, according to a report from The Truth About Guns.

One resident received a letter from the city dated Nov. 18 informing him that he is in violation of NYC Administrative Code 10-306 (b). According to the code, “No person may possess an ammunition feeding device which is designed for use in a rifle or shotgun and which is capable of holding more than five rounds of rifle or shotgun ammunition…”

The letter lists three long guns – all .22 caliber – registered by the owner that violate the city code because they each have the capacity to hold more than five rounds.

The city offers the gun owner three solutions to be in accordance with the law:

1. The firearms can be surrendered to a local police department where they may be sold or permanently removed from the city by the department.

2. The owner may also opt to remove the firearms from the city by either sale or transfer. However, the owner must then provide proof that the guns were removed from the city.

3. Lastly, the owner may choose to take the firearms and magazines to a licensed gunsmith in a timely manner to have them permanently modified to hold no more than five rounds of ammunition. And again, the owner is responsible for providing certification that the proper modifications have been made or proof that the firearms or magazines are in the possession of a gunsmith awaiting modifications.

However, the letter only states that immediate action is required and does not provide a specific time constraint.

Those who violate the city code by possessing a magazine that holds more than five rounds could face a fine of up to $300 and 16 days in jail, depending on any prior firearm-related offenses.

Additionally, according to the city code, gunsmiths and dealers are required to keep detailed records of all dispositions and modifications, which include the gun owner’s name and address, the type, caliber and quantity of ammunition or ammunition feeding devices, and the caliber, make, model, manufacturer’s name and serial number of the rifle or shotgun in question. This information must also be made available for all law enforcement agencies.

Although the letters aren’t exactly outright confiscation, but rather voluntary surrender notices, they still have many gun rights advocates on edge. Furthermore, it should be noted that the letters are based on New York City code, not the infamous New York SAFE Act.