Gun Trust rule changes mark the end of an era 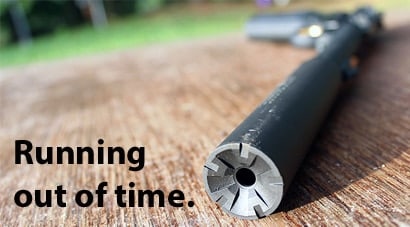 Guns.com ran an article back in September that focused on the ATF’s proposed changes to the way gun trusts will have to be certified.  The ATF’s proposed rule changes (ATF 41P) will make the gun trust as we know it a thing of the past.  The public comment phase is set to end Dec. 9 and changes could be implemented any time after that.

A gun trust allows a person to register NFA firearms to a trust rather than to his or her name, and the trust can have multiple trustees. The real appeal of a gun trust is that it greatly simplifies the process of registering machine guns, silencers and short-barreled rifles. It bypasses some of the obstacles individuals face like submitting fingerprints, photographs, and, the sometimes difficult task, obtaining the permission and signature of a Chief Law Enforcement Officer. With an established gun trust, you simply submit your paperwork to the ATF.

The new changes will turn the current process on its head.  Any new trusts will have to be certified the way individuals are certified, meaning every trustee will have to provide the aforementioned information or, more importantly, every individual will have to get approval from a CLEO and in some areas it just isn’t going to happen.

How will you know if your CLEO will sign?  Laws vary by state in some cases, but the real decisions happen at the county level.  Guntrustlawyer.com has been making some inquiries of CLEOs.  In some cases, like Orlando (a city in an otherwise industry-friendly state), CLEOs are already stating their opinions.

“Unfortunately, we do not believe the proposed language amendment will change our position with respect to whether the Orlando Police Chief should execute these forms for firearms transfers,” said Lee Ann Freeman, legal advisor for the Orlando Police Department. “It remains our position that the local law enforcement chief executive officer should not be involved in, or liable for, individual firearms transfers.”

Opposition to the proposed changes has been fairly predictable, but it has remained below the radar of the national media.  The reasons are complex.  No one in the firearms industry wants to vocally oppose background checks and these changes outlined in ATF 41P are directly addressing background checks.

One group that has led opposition is the American Silencer Association.  This group of suppressor makers has banded together to make their individual voices heard.  They’ve prepared a hybrid form letter that can be downloaded, customized and sent in during the public comment period for ATF 41P.  There’s even a Facebook page for Americans Opposed to ATF 41P.

While we’re uncertain how long implementation will take, time is running out if you want a gun trust for convenience, to avoid the hassle of a CLEO who won’t sign off on paperwork, or if you may want a gun trust in the future, in any form, for any perfectly legal and lawful reason.

If you have a lawyer already, he or she could potentially draw up papers.  But that will take time.  You could do all of the research and documentation yourself, though that has a tremendous amount of potential pitfalls.  This isn’t something you want to screw up, or have to fix through trial and error.

The easiest way is to have someone do it for you, and the most logical way to go about that is to turn to a specialist.  There are several of these providers online who make it incredibly easy to establish a trust, and with the deadline approaches they are offering package deals (199trust.com is running a special).

While I don’t like the hassle the system presents now, I like being able to own NFA firearms and suppressors.  Estimations from the firearms industry and the ATF both suggest that close to two-thirds of the current NFA market is comprised of gun trusts.

If there’s no legal demand for short-barreled rifles and shotguns, or silencers, these companies that are making these things are going to grow in other directions, or die out.  The market for NFA guns and suppressors depends on an actual market, which will diminish greatly if these changes make it harder for all of us, all of the law abiding citizens of the country, to even get the paperwork needed to begin the process of acquisition.