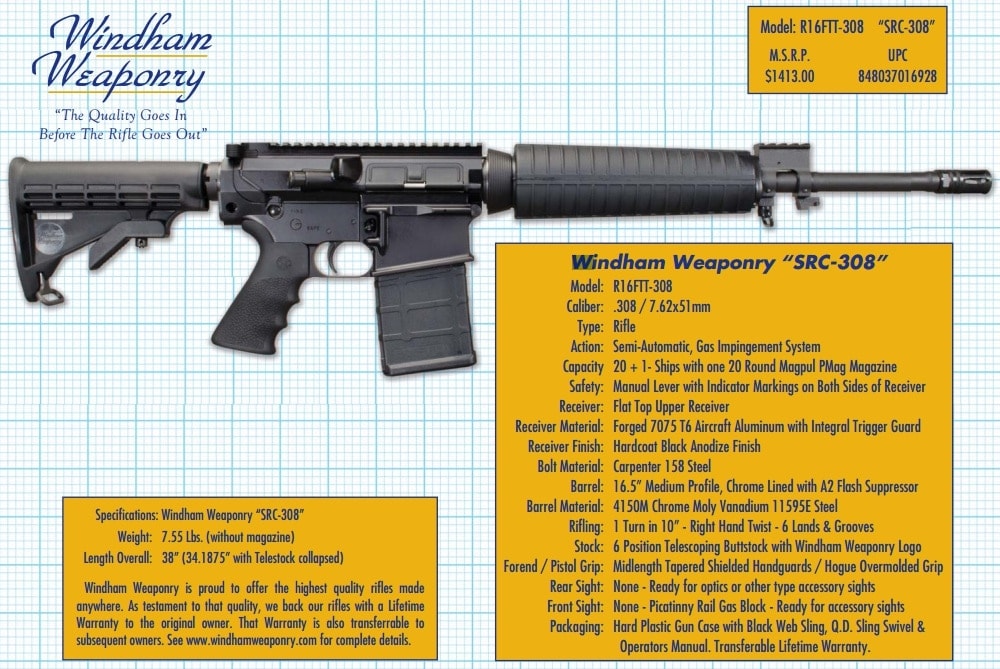 Windham Weaponry is the latest company to break into the AR-10 business with an upcoming .308 Winchester/7.62 NATO rifle, the SRC-308. It’s a straight-forward carbine that should appeal to a wide user base looking for a hard-hitting tactical rifle.

The SRC-308 is a direct-impingement rifle with a 16.5-inch carbine-length barrel and a mid-length gas system. For the buttstock and handguard it uses common A2-style parts but for the magazine and grip they go up a step with a 20-round Magpul PMAG and Hogue over-molded pistol grip.

It is an “optics ready” rifle, meaning it does not come with any sights installed. Optics and iron sights are often a personal preference so this will help keep the overall price down. The SRC-308 has a receiver-height railed gas block and standard flattop upper receiver for mounting iron sights and other optics.

The railed gas block is another Windham design that features an accessory lug and a 12-o’clock quick-detach sling socket built in.

Windham appears to have developed the receivers in-house with lines and contours similar to their carbon fiber rifles. Appearances not withstanding, the SRC-308 is built on hard-anodized 7075-T6 receivers, upper and lower. The lower receiver is reinforced at the buffer tower and has quick-detach sling mounting sockets on both sides of the rifle. The design sports an integral trigger guard for simplicity.

Even with the beefed-up receivers the SRC-308 is fairly lightweight at 7.5 pounds unloaded. Other specifications include an overall length of 32 inches with the stock collapsed (38 with it completely extended), a one-in-10 right hand twist and of course, the barrel is chrome-lined 4150 chromoly-vanadium steel for a long life.

The controls are standard and familiar to anyone with experience with AR-type rifles. While they are right-handed, the lower receiver is marked on both sides for users who prefer to use left-handed or ambidextrous safety selectors.

Windham has set the suggested retail price for the SRC-308 at $1,413 which means that real-world prices should be a lot closer to $1,100 when it becomes available. That includes a forward quick-detach sling mount, sling and hard case.

For now, the SRC-308 only really exists on paper and we expect to find out more about the rifle at the upcoming SHOT Show next January.

While at first blush it doesn’t look like Windham is breaking any molds with the SRC-308, a closer inspection shows that it has a lot of little features that make it special in the fast-growing AR-10 world. This is a solid general-purpose semi-automatic .308 and should do many things well, from self-defense to hunting and law enforcement.

It’s also probably not the last .308 we’ll see from Windham, and we fully expect to see other models to follow. Windham is fond of camouflaged rifles and we won’t be surprised to see camo print variants in the future.

For all the details and specifications head over to Windham Weaponry.