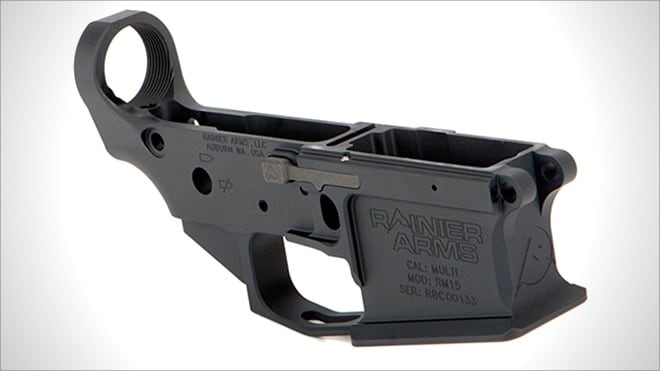 The AR-15 market is easing with more and more manufacturers catching up on backorders and buyers no longer picking shelves clean. People are actually finding some of what they’re looking for and manufacturers have a little more room to expand their product lines.

Rainier Arms, Wilson Combat and new company Tennessee Arms are each offering a new AR-15 lower receiver, each serving a different markets at the high-end and entry-level of the receiver business.

The Rainier Arms Ultra Match Ambi Lower Billet Receiver is a partially-stripped lower with a pre-installed bolt release on the right side of the receiver. As the name implies, it’s machined from a single billet of 7075-T6 aluminum and is designed to pair with Rainier billet uppers, although it is compatible with all billet uppers.

In addition to the ambidextrous bolt release the receiver is marked on both sides for use with 45-degree short-throw safeties, like those made by Battle Arms Development.

The Ultra Match Ambi receiver is designed to fit at precisely as possible with its upper receiver for the best in accuracy. To help ensure the tightest fit the lower uses a tensioning screw to eliminate any wobble or rattle between the upper and lower.

Rounding out the features is an enlarged, flared magwell for fast reloads and an angled, integral trigger guard. If you’re looking to make a 3-gun or other type of competition rifle, or just want a high-end ambidextrous billet lower, the Rainier Arms Ultra Match Ambi may be your best contender priced at $223. 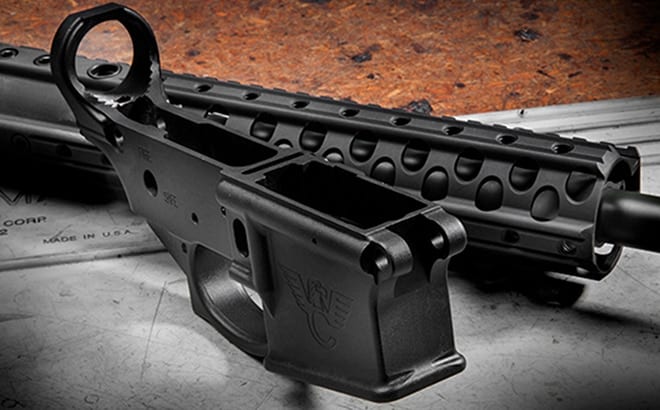 Wilson Combat is also introducing a new, premium receiver, although by Wilson standard’s, it’s a mid-level receiver for people who want the best but still want to save a little money at the same time.

Unlike Wilson’s flagship receivers, this is a forged 7075-T6 aluminum receiver, not a milled receiver. It’s still made to closer tolerances than any mil-spec receiver and with its integrated trigger guard is guaranteed to last a very long time. The trigger guard is overbuilt and curved for strength and provides extra room for gloved fingers.

Precision construction, trigger guard and Wilson Combat reputation aside, this is a no-frills lower receiver for straight-forward rifle builds using premium components. It has standard selector markings, multiple caliber markings on the left side and the Wilson Combat eagle on the right.

The most expensive receiver out of these new offerings, the Wilson Combat Enhanced Forged receiver is priced at $240, which is less than Wilson’s standard billet lower by $100. 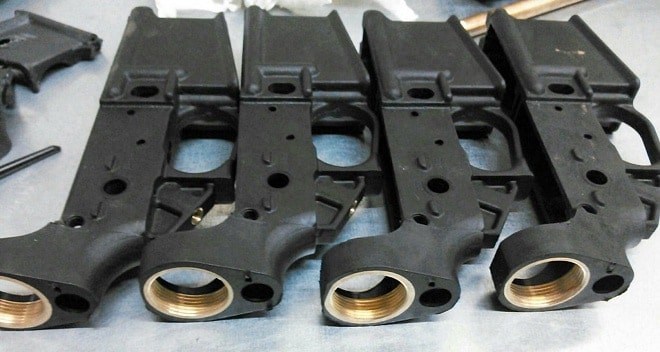 Bringing up the low-priced end of the lower spectrum are the new Tennessee Arms Hybrid receivers. These are pretty standard AR-15 lowers with one notable exception: they’re constructed largely from polymer, with the exception of a brass buffer tower insert.

Polymer lowers are becoming more and more common as of this year when lower receiver options ran thin. What people are finding is that polymer lowers, although relatively new and unproven, have a lot of advantages over traditional alloy receivers.

While newer poly receivers have been updated with better materials, there’s still a stigma. Tennessee Arms’ solution is to include a machined brass ring into the buffer tower to provide support to the buffer tower, reinforcing the weakest part of the lower receiver.

As an added bonus, the brass insert provides something more substantial for the buffer tube to thread over, reducing the chance of stripping threads by over-torquing the castle nut. There is also a second, smaller brass insert for the pistol grip screw to prevent stripping those threads as well.

The Hybrid brass and polymer receivers are just $45, well into pre-2013 pricing territory. For an addition $10 Tennessee Arms offers Hybrid receivers in desert tan, olive drab, flat dark earth and pink, with foliage green to follow soon. They also sell the Hybrid as a complete, not stripped lower, for $175.

That is slightly more than some complete polymer lower receivers, but unlike the slightly less-expensive competition, a complete Hybrid has all-steel mil-spec internals, where other manufacturer’s internals are just as polymer as the receivers.

The AR storm is at long last blowing over. If you were waiting for the craziness to die down before you started your next or first build, now is as good a time as any.