Photo of the day: That’s bucked up! 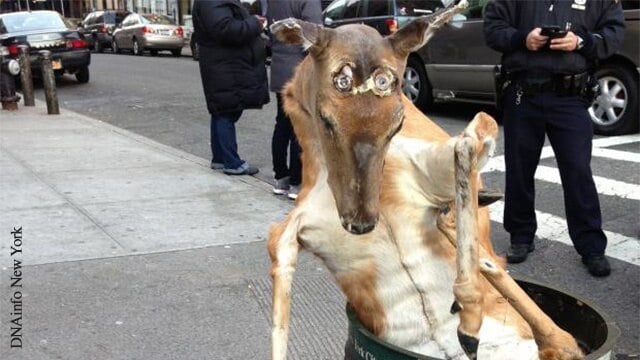 This taxidermied deer was discovered in a New York sidewalk trashcan.

Tuesday morning was just like any other day in The Big Apple, except a taxedermied deer was found stuffed into a sidewalk trashcan.

Passersby were shocked at the unusual site on 159th Street and Amsterdam, and some were barely convinced the animal was real in the first place, DNAinfo reports.

“What the hell is a damn deer doing up here?” said Viola Johnson, who works nearby where the deer was discovered.

“Is that a real deer? That can’t be real,” said another onlooker.

Spokeswoman for the Department of Sanitation Kathy Dawkins commented that while she was uncertain if that was the first taxidermied deer ever removed from a city street by the DSNY, they do frequently “remove small animals such as deceased dogs and cats.”

DSNY workers arrived around 8:30am and dumped the deer into the back of a trash compactor. Dawkins advised that anybody else in need of dumping a large animal to “call 311 so that a contracted vendor can remove the animal.”