An off-duty Texas police officer shot his friend last Saturday after a ‘wife swap’ didn’t go according to plan.

Things got heated after 29-year-old Olmos Park Police Officer Frankie Salazar and his 33-year-old friend Jesus Edward Guitron’s scheme started to unravel. The plan had been months in the making, and while the media has been referring to the failed sexcapade as a ‘wife swap,’ it’s not certain the women involved were actually married to the two men, Gawker reports. 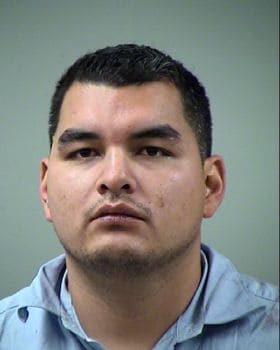 Guitron and his significant other went to Salazar’s San Antonio house, and after a couple of drinks, Salazar followed the unidentified 29-year-old female into a bedroom and began kissing her.

But according to the police report, she “didn’t feel right” and chose to renege on the arrangement. At the same time, Salazar’s significant other, unaware of the true purpose of the social visit, stormed into the room and confronted Salazar.

In the ensuing argument, Guitron and Salazar got into a physical altercation and Salazar told his significant other to grab his .45-caliber Springfield XDS pistol.

Salazar shot at Guitron three times, striking him in the chest, right hand and possibly his left pinky. Police were dispatched to the scene at approximately 3:30am and Guitron was transported to San Antonio Military Medical Center, where he was listed in critical but stable condition.

Salazar was arrested and charged with aggravated assault with a deadly weapon and was later released on $50,000 bail.