Even though we are a week away from the one year anniversary of the mass shooting at Sandy Hook Elementary School in Newtown, Connecticut, support for gun control is waning, according to a recent national poll conducted by CNN/ORC International.

The poll, which surveyed 843 adults around the country Nov. 18-20, found that 49 percent of Americans support stricter gun laws, with 50 percent opposing them.

In an earlier CNN poll, conducted last January in the aftermath of the school shooting that left 26 people dead, including 20 first-graders, support for tougher gun laws was at 55 percent, six percentage points higher than it is compared with the latest figures. 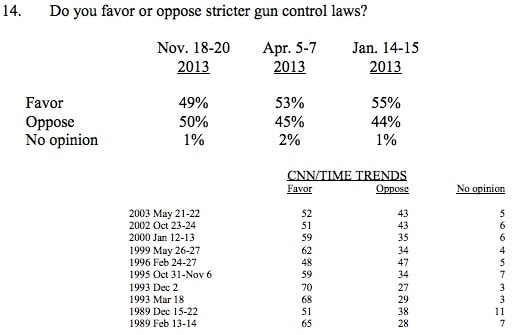 “Demographically speaking, the drop in support for stricter gun laws is mostly based on where people live, with a 10-point decline in the Midwest and a 15-point drop in urban areas having a lot to do with the overall decline nationally,” explained CNN Polling Director Keating Holland.

“Two-thirds of people who live in big cities supported stricter gun control laws in the weeks following Newtown; now that figure is down to a bare majority,” Holland continued. “And while support for new gun laws is down in all regions of the country, it has fallen further in the Midwest.”

Generally speaking, support for gun control is still popular in the Northeast and West while majorities oppose it in the South and midwest.

While gauging public opinion on any issue is an inexact science and one should not take too much stock in any one poll or survey, it does appears that support for gun control is fading.

Like the CNN poll, a Gallup survey released in October found that about half (49 percent) of Americans believe that laws covering the sale of firearms should be made more strict while the other half believes gun laws should be kept as they are now (37 percent) or made less strict (13 percent).

Immediately following Sandy Hook support for tougher gun laws spiked at 58 percent, the highest it had been since 2004 when it reached 60 percent, according to Gallup’s tracking (see video below):