PCP Ammunition has been developing several types lightweight polymer-cased ammunition over the past couple of years and are working on a new batch in .308 Winchester. This limited run will be offered to select shooters that sign up for testing.

There are several advantages to using polymers for ammunition cases. The biggest is that it offers a significant weight reduction. Poly-cased ammo weighs about 30 percent less than brass-cased ammo, which is enormous for anyone who has to hike with any amount of it.

For this reason alone PCP has been working with the Department of Defense to develop specialty cartridges including an accuratized .50 BMG load. The cases are constructed with three components, two polymer sections, one for the body and the other for the shoulders and neck mated to a standard brass case head.

Another strength of polymer-cased ammunition is precision. Topped with Barnes, Berger and Hornady bullets PCP is getting very tight groups with their ammo, which they attribute to the case materials. PCP’s ammo is for target shooters and long-range hunting. 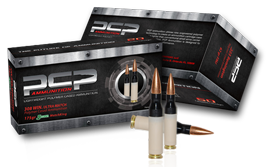 The ammo is completely SAAMI-specified, it’s just made with a lot of plastic.

While polymer is also less expensive to manufacture, PCP is not listing prices for their ammo yet. They’re a new company and without a doubt have research and development expenses to cover. It isn’t too surprising that they’re going after the premium market first with their match-grade ammo.

In the future, however, it’s very likely that the use of polymers in manufacturing will reduce the cost of ammunition.

The one drawback of polymer cases is that they do not provide any type of heat-sinking. Brass is a solid conductor of heat and spent shells wick heat out of chambers as they’re extracted. Guns that shoot a volume of polymer ammo in a short time will heat up more and heat up faster.

PCP Ammunition is looking for experienced shooters to test their upcoming .308 loads. If you want to try this new technology go to the PCP Ammunition Shop and sign up.

The company wants user feedback. While they have tested the ammo extensively, it would take a massive effort for the company to test it with every type of .308 firearm on the market, so in a sense, they’re crowdsourcing the testing.

“We are offering this limited release of production to a select number of consumers,” reads the sign-up page. We are limiting the production initially to allow for user feedback that validates our test results. PCP Ammunition and certified third party testing facilities have performed thousands of tests on this product and we are confident in its safety and performance.

“We are extremely interested in the feedback of our first group of civilian consumers. Although we have tested the ammunition in numerous weapon platforms, we have by no means tested them all.”

Other details including how many people they expect to work with, how much ammo they plan on shipping to individuals and how much ammo is in this batch are unavailable.

Polymers have revolutionized every other aspect of shooting. In a sense, polymer-cased ammo is overdue. It will be interesting to see how it changes shooting.