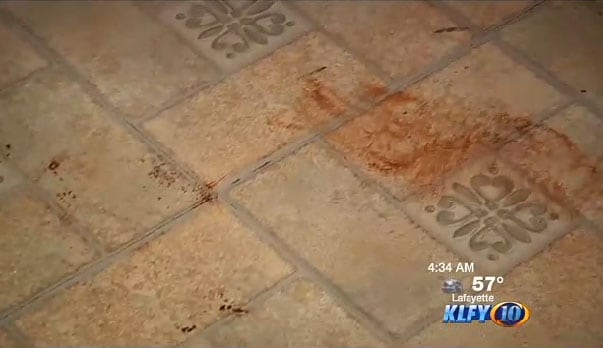 A gruesome reminder of the home invasion remains on the kitchen floor. (Photo credit: KLFY)

A would-be robber was fatally shot in a Ville Platte, Louisiana, home in the early morning hours Sunday after one of the occupants of the home – who narrowly escaped an outright execution – took the suspect’s own gun from him.

About 1 a.m. the pregnant homeowner’s boyfriend walked outside to get cigarettes from her car and just minutes after returning inside, an armed suspect walked through the front door with his face covered, according to KLFY.

The homeowner’s four children were in bed asleep and the boyfriend was cleaning a back bathroom. The suspect walked through the house, confronted the boyfriend, held the gun to his head and demanded money. The boyfriend refused and the suspect pulled the trigger. But the gun jammed.

A scuffle between the two men ensued and the boyfriend was able to take the suspect’s gun from him. The man pulled the trigger, but that time it didn’t jam and the suspect was shot several times with his own gun.

According to the homeowner, her boyfriend immediately knew the suspect was dead. But, for reasons unknown, he then began to rummage through the suspect’s pockets, while the homeowner said he needed to just call an ambulance.

When police arrived they found the suspect lying on the kitchen floor. He was pronounced dead at the scene and had at least one gunshot wound to the chest.

The suspect was later identified as 25-year-old Malcolm Wilson.

Both the homeowner and her boyfriend’s identities have been withheld, but the woman says that she now fears retaliation from Wilson’s family.

“I’m scared, because they got rumors that the boy’s brothers are trying to come after us. People have been calling me, saying that they been calling with all kind of threats,” she said.

It is unknown at this time if either the homeowner or her boyfriend were acquainted with Wilson.

Neither are facing charges and police stated that although they do not suspect foul play at this point, the investigation is still ongoing.

However, authorities did question another unidentified female in relation to the case, but she has since been released. No charges have been filed against her and authorities say she is not a suspect. Her role in the home invasion and attempted robbery, if any, is unknown.