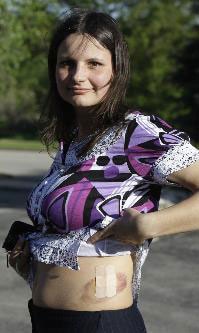 Raluca Buznea, who was 17 weeks pregnant at the time of the incident, only suffered minor injuries when a stray .45-caliber bullet grazed her abdomen. (Photo credit: Journal Sentinel)

The Delafield, Wisconsin, city council unanimously voted this week against reissuing a permit that would allow a gun club to re-open its doors after being closed for nearly three years.

The Hartland Sportsman’s Club was shut down in 2010 after a stray .45-caliber bullet grazed a pregnant woman who was dining at an outdoor patio of a nearby restaurant, the Journal Sentinel reports.

Raluca Buznea, who was 17 weeks pregnant at the time, didn’t even know at first that she had been struck by a bullet.

“I felt a big pain on my left side,” Buznea said following the incident. “Initially, I thought it was a kid with a soccer ball hitting me. I thought that because I was hit a couple of times with a soccer ball and I thought it was the same thing. So I was looking for the ball and the kid and I just realized, I don’t have air. I was really breathless so I stood up and then my colleague said that the bullet fell down.”

Buznea was treated at a local hospital for minor injuries, which included bruising and a scratch. She recovered without any problems and the baby was not harmed.

But the legal issues were just beginning for the range, which had been in operation since 1948. The gun club was already in a heated debate with neighbors and the city council over noise from the range and the incident with Buznea only added fuel to the fire.

After the State Crime Lab determined that the stray bullet had in fact come from the range, the gun club voluntarily closed its doors. The city then revoked the club’s permit to operate.

Although authorities have yet to determine who fired the gun that resulted in the stray bullet, Steve Gibbs, the club’s attorney at the time, believed that it came from a member who was not following the club’s rules and possibly shooting at an unapproved target.

“Based upon the results of the internal investigation, we’ll take appropriate actions to put in safeguards to make sure this never happens again,” Gibbs added.

Following the stray bullet incident, the club addressed numerous safety issues and made modifications in an effort to regain its permit. However, attorney Jeremy Levinson said that neither the city council nor the community were satisfied with the improvements.

“So the target, if I can coin an awkward pun, they kept moving the target,” Levinson said.

While it appears that a majority of the community is against re-opening the range, others, including a local Boy Scout troop argue that the club was an important resource in the community providing the opportunity for training and learning about gun safety.

Levinson also indicated that the club was considering taking legal action against the city.