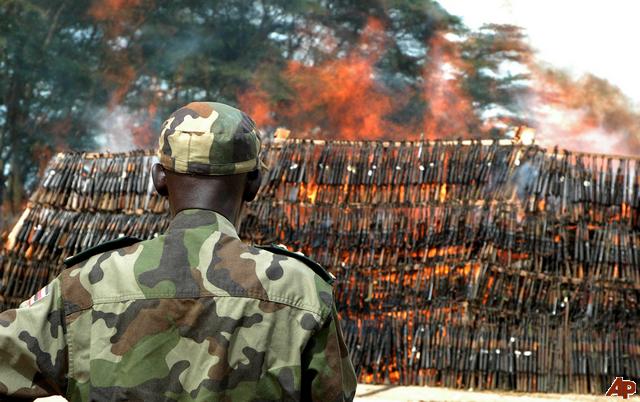 Trolling. That’s the word that comes to mind when I read Lt. Col. Robert L. Bateman’s editorial on the Second Amendment in Esquire.

He’s got to be trolling the gun community. Either that or he’s bat-shit crazy. Those are the only two conclusions this humble writer can draw from reading his piece entitled, “It’s Time to Talk About Guns and the Supreme Court.”

Seriously, no solemn individual — let alone an officer who swears to protect and defend the Constitution from all enemies foreign and domestic — says what he said with a straight face.

It’s got to be a ploy to whip up gun owners and Second Amendment advocates into a frenzy, to create controversy and to attract attention to the Esquire’s website. And the worst part is, it’s working.

Okay, so what did Bateman say that was so controversial and inflaming?

Five of the nine members of the Supreme Court agreed that the part in the Second Amendment which talks about “A Well Regulated Militia, Being Necessary To The Security Of A Free State…” did not matter. In other words, they flunked basic high school history.

The lengths to which Justice Scalia had to go in his attempt to rewrite American history and the English language are as stunning as they are egregious. In essence, what he said about the words written by the Founding Fathers was, “Yeah, they didn’t really mean what they said.”

Seen in this context, the Second Amendment is not for “traditionally lawful purposes like self-defense within the home,” as the Supreme Court ruled, but rather it is only for the purpose of “defending the nation,” as Bateman argues which leads him to reason that firearm ownership that does not conform to that standard is unconstitutional.

Consequently, he proposes a six-point platform that drastically curtails the Second Amendments rights of law-abiding citizens. As you’ll read below, it includes, severe restrictions on the types of guns one can own, confiscatory polices for guns that fall outside those categories, an end to police auctions that sell firearms, a nationwide federally-funded ‘gun buyback’ program, a 400 percent tax hike on ammo, the nationalization of gun manufacturers among others:

1. The only guns permitted will be the following:

a. Smoothbore or Rifled muzzle-loading blackpowder muskets. No 7-11 in history has ever been held up with one of these.
b. Double-barrel breech-loading shotguns. Hunting with these is valid.
c. Bolt-action rifles with a magazine capacity no greater than five rounds. Like I said, hunting is valid. But if you cannot bring down a defenseless deer in under five rounds, then you have no fking reason to be holding a killing tool in the first place.

2. We will pry your gun from your cold, dead, fingers. That is because I am willing to wait until you die, hopefully of natural causes. Guns, except for the three approved categories, cannot be inherited. When you die your weapons must be turned into the local police department, which will then destroy them. (Weapons of historical significance will be de-milled, but may be preserved.)

3. Police departments are no longer allowed to sell or auction weapons used in crimes after the cases have been closed. (That will piss off some cops, since they really need this money. But you know what they need more? Less violence and death. By continuing the process of weapon recirculation, they are only making their jobs — or the jobs of some other cops — harder.)

4. We will submit a new tax on ammunition. In the first two years it will be 400 percent of the current retail cost of that type of ammunition. (Exemptions for the ammo used by the approved weapons.) Thereafter it will increase by 20 percent per year.

5. We will initiate a nationwide “buy-back” program, effective immediately, with the payouts coming from the DoD budget. This buy-back program will start purchasing weapons at 200 percent of their face value the first year, 150 percent the second year, 100 percent the third year. Thereafter there will be a 10 year pause, at which point the guns can be sold to the government at 10 percent of their value for the next 50 years.

6. The major gun manufactures of the United States, less those who create weapons for the federal government and the armed forces, will be bought out by the United States of America, for our own damned good.

He can’t be serious.

Well, that’s not entirely true, he can really feel this way. I’m sure some gun-control advocates do feel this way. But that said, he must understand that none of what he’s proposed, with the exception of number 3, has any chance of becoming a reality.

Congress would never pass such nonsense and the reason is simple: we are a gun-loving society (conservatively speaking, 1 out of 3 Americans own a firearm), with many gun-loving politicians (in 2012, 261 Congressional candidates received donations from the NRA), that believes self-defense is a fundamental right that needs to be protected and not infringed upon.

So, with that it mind it raises the question: what do you call someone who spouts utter claptrap in an effort to garner attention and piss people off?

So, from my vantage point, Bateman, who is described by the Small Wars Journal as an “infantryman, historian and prolific writer,” should also add troll to that list because, at least with respect to gun ownership and the Second Amendment, that’s exactly what he’s acting like.