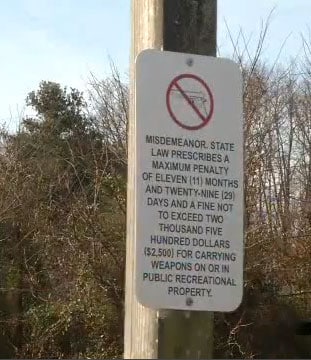 Bristol, Tennessee Parks and Recreation Director Terry Napier said city workers are already in the process of taking down the “no guns” signs. (Photo credit: WCYB)

The Bristol, Tennessee, city council voted 4-1 Tuesday night to repeal a weapons ban and allow concealed carry permit holders to carry guns in most of the city’s parks.

But the newly voted measure will allow guns in 28 of the city’s 31parks. The three parks with a ban still in place are located either on or adjoining school properties. “Since they’re really a part of the school campus, we need to maintain that gun-free zone,” said Parks and Recreation Director Terry Napier.

However, the measure will still allow permit holders to leave their firearms properly secured and concealed inside their vehicles – like in the glove box or trunk – while visiting the parks where weapons are still banned.

“I can simply take my pistol off my belt put it in the trunk of my car and proceed on and I’m not in violation of the law,” Napier explains.

More than a dozen residents were present at this week’s city council meeting and opinions on lifting the ban were divided.

Planning Commission member Alison Scanlan is afraid of the impact the change might have on residents and potential economic development partners for the city.

“Are our city parks so unsafe that we should feel it necessary to arm ourselves for protection and safety? That concerns me as someone who uses our city parks on a weekly basis,” Scanlan said.

However, councilman Chad Keen disagrees with Feierabend’s assessment of the city’s crime rate. Keen said that he recently acquired information from authorities which detailed “a significant amount of crime” in and around the city’s parks.

Jack Young is both a gun owner and a concealed carry permit holder. He voted for the measure and believes that the state’s strict requirements for obtaining a permit shows that permit holders are generally responsible people who uphold the law and can be trusted.

Lea Powers also voted for the change. “There are very few sane people that have committed crimes against one another,” she said. “I think we have to go deeper as a society to address a lot of what has happened recently, but I think to take away an individual’s rights that are guaranteed by our Constitution is not the way to do that.”

Heather Tuell wasn’t present at the council meeting but spoke with reporters at a local park following the change. Tuell frequently brings her 2-year-old daughter to the park, but now that guns are allowed, she admits that they are “probably not going to be coming as often… I just don’t like her being around guns being so little,” she said.

But Melinda Reagan, who voiced her opinion at the council meeting, often hikes and jogs at one of the parks and said that she would feel safer knowing that there were responsible, permitted, gun-carrying citizens on the property’s isolated trails and switchbacks. Reagan also pointed out that some of the parks are located in “scary parts of the city.”

Mayor Michelle Dolan agrees that guns in the hands of law abiding citizens would increase safety in and around the parks. “I would feel more confident at a park with my children with someone who had a gun if I needed to be defended against an attack,” she said.

Napier also pointed out that conceal carry permit holders are “people who understand that responsibility and you’re not going to see a difference.”