The A-10 Warthog is one of the toughest jets ever built. With nearly 1,200-pounds of armor, this twin engine aircraft can take a severe beating and still get the mission accomplished. And with a GAU-8 Avenger 30 mm rotary cannon that can belch out 4,200 rounds per minute, it’s power is rivaled only by a roundhouse kick from Chuck Norris.

The GAU-8 is precisely, big.

It’s been rumored the GAU-8, like the one featured in the above YouTube video, fires so quickly that a long trigger burst can actually stall the aircraft. But according to retired Air Force Col. Steve Ruehl, who has logged 3,500 hours in an A-10, that’s just plain “Hawg-wash.”

“I have fired as many as 500 rounds in one trigger burst,” Ruehl told Stars and Stripes. “That takes just about seven, eight seconds, and [it had] no impact on the air speed of the aircraft.” 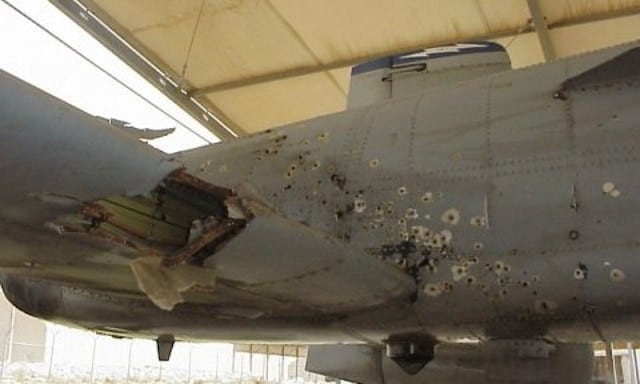 Captain Kim Campbell of the 75th Expeditionary Fighter Squadron managed to fly her badly wounded Warthog back to safety.

Another prevalent myth surrounding the Hog is that duct tape can be used to make extensive repairs to the frame. According to an article from the LA Times, “the plane is designed to keep flying even if parts of the wing or one of its engines has been blown to shreds. And the cockpit is surrounded by a bullet-resistant titanium tub.”

So, since the Navy uses 1,000 mph duct tape to make repairs to radomes, it’s not a stretch to think it could also be used to patch up good sized bullet holes.

Any way you cut it, the Warthog is one of the coolest planes in existence.