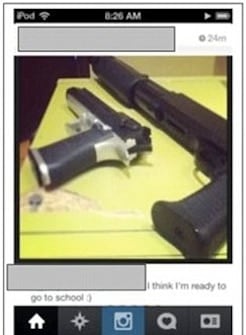 This photo was posted by the first teen with the caption, “I think I’m ready to go to school.”

Two 13-year-old Connecticut boys found themselves in hot water Thursday after posting photos of guns to their Instagram account. One of them was arrested and now faces charges.

The first photo was uploaded to Instagram at approximately 8 a.m. with the caption, “I think I’m ready to go to school.”

The two guns in the photo turned out to be pellet guns, both of which were confiscated by police. The boy was charged with disorderly conduct and released to his parents.

However, several hours later, another 13-year-old boy from the same school also uploaded a photo of a gun to his Instagram account. The caption read, “Colt Anaconda .357. Damn I lover revolvers.” 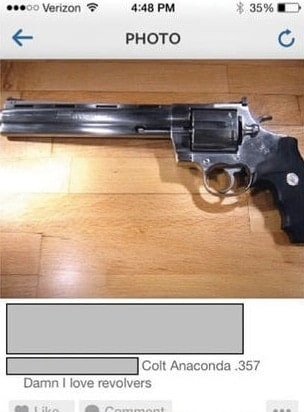 This photo was posted by the second teen with the caption, “Colt Anaconda .357. Damn I lover revolvers.”

Again, Redding police swiftly launched an investigation but determined that in this case, the photo was taken from another source on the Internet and the teen did not actually own or have access to the firearm.

“Anything that is posted online, once it gets out there it’s read by all and oftentimes it’s interpreted differently by all,” Fuchs told The Post. “Whether its words or photographs, we all have to be very cognizant about the consequences of whatever it is we put out there on the internet.”