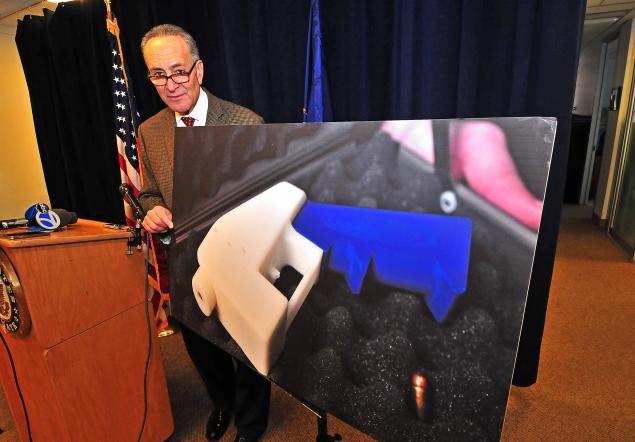 New York Sen. Chuck Schumer shows off a picture of a 3D printed gun, which he got at Kinkos allegedly. (Photo credit: NY Daily News)

The U.S. Senate voted to renew the ban on undetectable firearms Monday, but declined to expand it by adding more restrictions.

The bill passed by “unanimous consent,” NBC News reports. The Undetectable Firearms Act, which requires all firearms to be detectable by a metal detector, has been in effect for 25 years and was set to expire today, but congress voted to extend it for another 10 years.

Rep. Howard Coble (R-NC), who introduced the bill to the house, urged the Senate to pass the bill without additional language (the proposed bill was only one-sentence long). He said he feared it would not be renewed if gun control advocates pushed for more.

Gun rights advocates, like the National Rifle Association, also argued against expanding the law, even though they did not outright support renewing it for another decade.

Sen. Chuck Schumer (D-NY) aimed to add language to close what he called a “glaring loophole” in the law, NBC News reports.

Earlier in 2013, a non-profit company successfully created plastic gun designs — ones that comply with the UFA as they require materials that are detectable by metal detectors in order to successfully fire a round.

The bill now goes to the president’s desk.