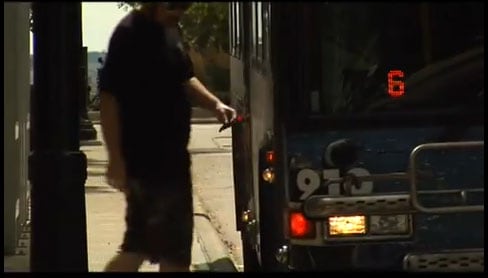 If Wisconsin Carry successfully sues the city – as they have in the past – passengers may be allowed to carry firearms on public transit. (Photo credit: City of Madison)

Wisconsin Carry, Inc., a non-profit, gun-rights group based out of Milwaukee, is preparing for a legal battle with the Madison Metro Transit, according to the State Journal. The conflict stems over a policy which prohibits weapons from being carried onto city buses.

The group sent a letter to the city of Madison last month requesting they review and amend the policy, claiming that it is in violation of a state statute that “prohibits political subdivisions of the state including cities, villages, towns, and counties from enacting or adopting resolutions that regulate the possession, bearing, and transportation of firearms unless those ordinances or resolutions are the same as, similar to, and no more stringent that, a state statute.”

The letter goes on to explain that the group’s legal team unsuccessfully searched for a state law that restricts firearms on mass public transit.

Wisconsin Carry gave the city until Dec. 3 to change the policy to “avoid impending civil litigation,” but the city did no such thing, claiming that its policy was both legal and in the best interest of the passengers.

Additionally, city officials stated that the policy, which has been in effect since the mid-1990s, was in place before the new statute was even adopted in 2011. Officials also maintain that they are confident with the policy and are prepared to defend it in court.

However, it doesn’t just ban guns, but also prohibits passengers from bringing “items of a dangerous nature” onto city buses.

“It’s in the best interest of our passengers,” Metro spokesman Mick Rusch said. “We have a lot of items we don’t allow on buses in the interest of safety.”

Nonetheless, Wisconsin Carry President Nik Clark maintains that residents should be allowed to carry firearms on the city’s public transportation. Clark also stated that he hoped the case would help set precedence for other public transit across the state with similar policies. 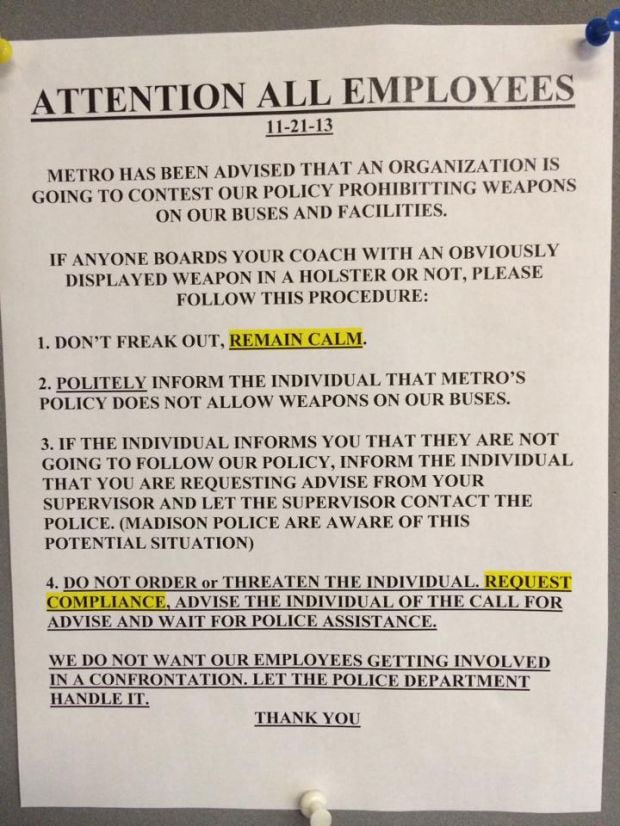 The Madison Metro Transit notified employees of the looming lawsuit and offered advice on how to deal with passengers carrying firearms. (Photo credit: Wisconsin State Journal)

Although the gun-rights group has been aware of the city’s policy for some time, according to Clark, the group was waiting for a case that would challenge the legality of the weapons ban. In November that opportunity came when a Madison resident contacted Wisconsin Carry after he unsuccessfully sought to change the city’s weapons policy.

In the past, the group has sued – and won — state municipalities over “unlawful infringement of the right to carry,” including when the city was ordered to fork over $10,000 after five men were charged with disorderly conducted for openly carrying holstered guns into a Madison restaurant.

In addition, the group sued over legal issues that arose from a man wearing a holstered gun on his porch, a woman who wore her gun in church and a man who was arrested for carrying a gun near his home which was within 1,000 feet of a school.

Clark stated that the group plans to file the lawsuit by mid-December.