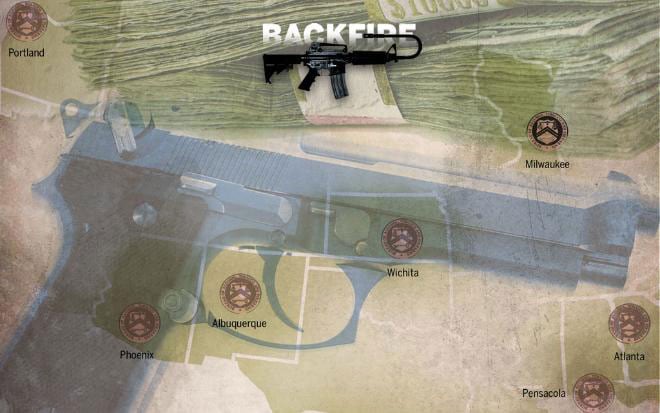 Investigative reporters documented questionable activities by the ATF in at least seven cities across the country. (Photo credit: The Journal Sentinel)

An investigative report published this week by the Journal Sentinel claims that the U.S. Bureau of Alcohol, Tobacco, Firearms and Explosives used “rogue tactics” to carry out sting operations in a supposed effort to get guns out of the hands of criminals and illegal drugs off the streets.

Among the list of debatable strategies was tricking mentally disabled people to execute their plans for illegally purchasing firearms, only to later turn around and arrest them. The ATF also used such goodies as video games, pot, alcohol and provocatively dressed, flirty female agents to entice unknowing underage teens into participating in their operations, only to bust them later for the same activities that the undercover agents encouraged. In addition, many of these operations were being held in so-called “safe zones” near schools and churches.

The newspaper’s investigative team has been tracking some of the Bureau’s questionable activities since the beginning of the year, and have documented incidents occurring in at least seven cities across the country. Meanwhile, the ATF has been praised for its effective efforts in catching violent criminals and making our cities safer.

But are they actually “violent criminals” or just unlucky pawns in a somewhat shady game? According to the report, the so-called criminals got the short end of the stick and although they were nabbed for illegal activities, they could have been described in many ways, but unlikely as violent criminals.

In Wichita, agents used what they described as a “slow-headed” man with a low IQ as a key player in one sting operation because, according to the “slow-headed” man’s attorney, the “30-something bearded and tattooed white guys” just wouldn’t have worked.

In Albuquerque, agents found drug addict with an IQ of only 54 who had brain damage after being hit by a drunk driver when he was 7-years-old. “He wouldn’t know how to use a machine gun to save his ass,” so agents gave him a “tutorial” on how to find illegal machine guns. And when he succeeded, this “violent criminal” was taken off the streets. But the operation was botched when the agents’ fake storefront was burglarized and the machine gun was stolen. The stolen machine gun – which was actually originally stolen by the drug addict from another agent’s car – has yet to be recovered.

In the same city agents also pressed for specific firearms – such as sawed-off shotguns – because they would bring tougher penalties. They allowed convicted felons to purchase shotguns, suggested sawing them off and even provided instructions on how to do it.

Agents often offered ridiculously high prices for firearms, which would encourage suspects to buy guns from a store only to turn around and illegally sell them to the undercover agents for a profit. In addition, the ATF also set up fake pawnshops that would readily and without question accept any stolen goods – including firearms – prompting a rash of burglaries and theft. And although the Pensacola pawn shop was burglarized at least twice during the sting, it was still considered a success.

At a pawn shop in Pensacola, ATF agents knowingly hired a convicted felon to run one of the pawnshops. The number of arrests skyrocketed in that area when people were busted for unknowingly attempting to sell firearms to a convicted felon – the same one who the ATF hired to run the pawn shop.

The article continues to detail operations across the country and the antics the agency used to pull them off.

Investigative reporters requested an interview with the ATF Director B. Todd Jones or any other officials, but the requests were declined. However, spokeswoman Ginger Colbrun provided the newspaper with a written statement and also suggested that they read the ATF’s press releases. But the ATF doesn’t publicize the outcome of every single operation and often times those records aren’t made available to the public.

Colbrun maintains that the ATF’s tactics are making our streets safer by ridding communities of criminals, firearms and illegal drugs.

“Violence, gun trafficking, and drug dealing are the main ingredients of these individual’s lifestyles whom are targeted,” Colbrun noted in the statement. “They preyed on and take advantage of others for their own selfish gain to perpetuate a culture of violence on the streets. The focus of a long-term undercover investigation is ultimately to make our communities safer.”

“Firearms are taken off the streets which could have otherwise been used to carry out additional violent criminal acts… Success is not measured through the media attention or the number of defendants arrested, but rather the successful prosecution of these criminals who will go away for a very long time, as well as the firearms seized which can no longer be used to terrorize,” Colbrun explained.

But not everyone agrees that the ATF is doing such as great job.

“For street crime in the federal system, we want cases to take us beyond the immediate person into a more significant, dangerous group,” said defense attorney Rodney Cubbie, former head of the organized crime unit of the U.S. Attorney’s Office in Milwaukee. “It seems like these cases stop with the particular individual. That is a waste of federal resources.”

“To open a storefront and just have an ad hoc potluck kind of a hope that maybe you’ll find somebody who might commit crimes in your presence, that makes no sense to me,” said defense attorney Franklyn Gimbel, a former assistant to a U.S. attorney. “They got a bunch of table scraps, that’s what they got, when it comes down to it.”

But questions aren’t only arising over the agents involved and whether or not the operations are actually making our streets safer. Some are also questioning the Bureau’s use of funds – or the lack thereof.

Apparently, while the ATF was busy spending money to set up phony pawn shops, tattoo parlors, recording studios and thrift stores, and even providing cash for unknowing key players to get tattoos advertising their fake storefronts, the agency has been notorious for packing up after an operation, leaving a damaged mess and the landlord to foot the bill.

One Portland woman said agents rented property from her only to remove an expensive parking lot spotlight without permission, in addition to causing $30,000 in damage to the roof. The woman said they shut down the operation and disappeared before she was able to contact them about the damages.

“To say this is just a few people, a few bad apples, I don’t buy it,” said David Harris, a professor at the University of Pittsburgh School of Law and an expert on law enforcement tactics and regulation. “If your agency is in good shape with policy, training, supervision and accountability, the bad apples will not be able to take things to this level.”

And according to Rory Little, a former longtime federal prosecutor, the ATF’s policies and procedures have been “a source of frustration for everybody” since the agency was still part of the Treasury Department in the late 1990s. Apparently, not too much has changed in the last 20 years.