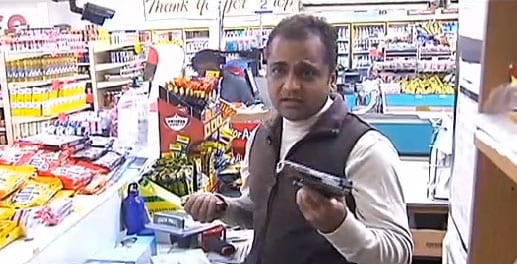 The fed-up owner shows reporters the gun he purchased to keep behind the counter at the store. (Photo credit: ABC)

An attempted robbery at a corner supermarket in Cordele, Georgia, Wednesday night left one employee shot, another employee chasing the would-be robbers from the store with a machete and the store owner vowing that next time his employees will be more prepared to fight back.

As reported by a local ABC affiliate, five men, all with their faced covered and at least one armed with a gun, walked into the store and demanded money from the clerk. But rather than comply, the clerk simply reached behind the counter and pulled out a machete.

However, the would-be robbers didn’t take too kindly to the clerk bringing a very large knife to their gun fight and fired several rounds in the store, striking a different employee once. Moments later the store’s surveillance video shows the suspects running out of the store with the machete wielding employee right behind them.

The employee who was shot was treated for his injuries and is expected to make a full recovery.

The suspects got away and although authorities aren’t sure who the men are, they hope that the images caught on the surveillance video will help to catch them. The store owner is also offering a $500 reward for their capture.

And although he’s thankful that nobody was injured more severely than they were, Detective Ketorie Sales does not think that the machete-wielding clerk’s actions were the best choice.

“You don’t bring a machete to a gun fight,” Sales said. “Actually they’re lucky they didn’t get more serious injuries than they got. Don’t fight back. Life is precious, you don’t want to get hurt over a few dollars.”

But the store owner, Dennis Barot is fed up with crime in the area and doesn’t agree with Sales’ idea of not fighting back. In fact, “I just bought a gun for my employee to shoot the person if it’s left up to them,” Barot told reporters, also stating that he has other means of protecting the store as well.

Nonetheless, Sales admits that the area has seen more than its fair share of robberies recently.

“We’ve had a string of armed robberies in the last week or two. We believe they all may be connected. There are a lot of similarities,” Sales stated.

And Barot says his store has seen the brunt of it. Just a week prior to the latest robbery attempt, masked men broke into the store and stole lottery tickets, cigarettes and soda pop. Then, just days later, burglars used a sledge hammer to smash two of the store’s front windows to get inside.

But the fed up store owner said that next time his employees will be ready to teach the criminals a lesson.

“I think they need to learn a lesson,” Barot said, “that if you try to hurt someone, someone will do the same to you.”