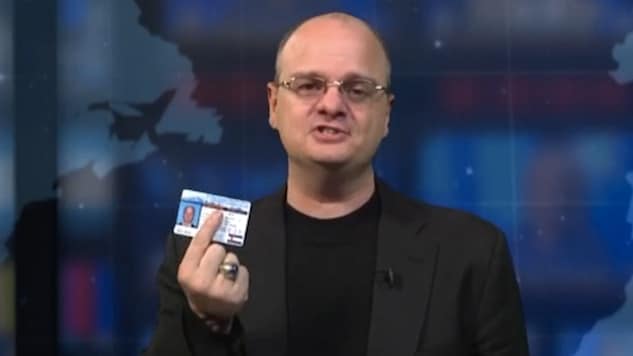 “Dr. Chaps” warned Right Wing Watch readers that he just got his concealed carry permit, and he’s not afraid to use it.

“So, I did recently go down and I got my concealed carry permit,” Klingenschmitt said on the most recent episode of Pray in Jesus’ Name. “So for those of you watching on Right Wing Watch and issuing death threats against me, just know that if you come to my house and you threaten my wife, that I will defend myself and my wife. And I’ll pray for your soul. I pray that you go to heaven.”

Klingenschmitt claimed that commenters on RightWingWatch.org, a website that aims to “expose the agenda of the extreme Right,” were issuing death threats against him via YouTube.

Klingenschmitt has criticized RightWingWatch.org for highlighting clips of his show on its channel. He also tried to have the material removed, but his efforts were trumped because of “Fair Use” laws, which allow copyrighted material to be used during news or commentary, Opposing Views reports.

The evangelical Protestant chaplain went on to reference Luke 22:36, a Bible passage that he interprets as being the foundation for the Second Amendment.

The verse reads, “But now if you have a purse, take it, and also a bag; and if you don’t have a sword, sell your cloak and buy one.”

“America, you can follow Jesus’ advice and Jesus’ teaching and arm yourself … God has given us a right to self defense,” Klingenschmitt said.

According to The Washington Post, after serving 20 years in the Navy, Klingenschmitt was court-martialed in 2006 for disobeying an order by protesting in uniform outside the White House. In 2007 he was forced out with an honorable discharge.