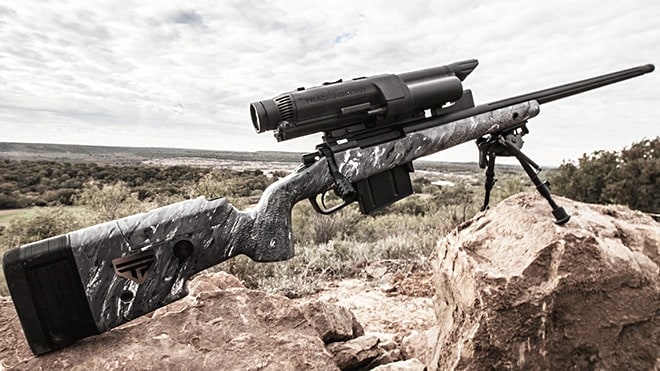 TrackingPoint is announcing a fourth model of “precision guided rifle,” or PGR, to their list of ultra high-end, long-range “smart scope”-equipped magnum rifles, the XS4.

The XS4 follows in the footsteps of the company’s flagship rifle, the XS1, but opts to use a more traditional hunting and benchrest shooting-type stock in place of the XS1’s modular tactical stock.

“Our customers have been asking for the power of our 338 Lapua Magnum smart rifles in the form factor of our popular XS3 hunting model,” said John Lupher, TrackingPoint CEO, in the press release. “One of the best parts of working with our community of TrackingPoint PGF owners is that we can learn from their feedback and develop products to suit customer needs as our company grows.”

TrackingPoint’s PGRs have a unique scope system that calculates the distance to the target with a laser rangefinder and automatically compensates for the bullet drop along with a host of other factors, including atmospheric conditions like barometric pressure and air temperature, the rifle’s cant and even the Coriolis effect. 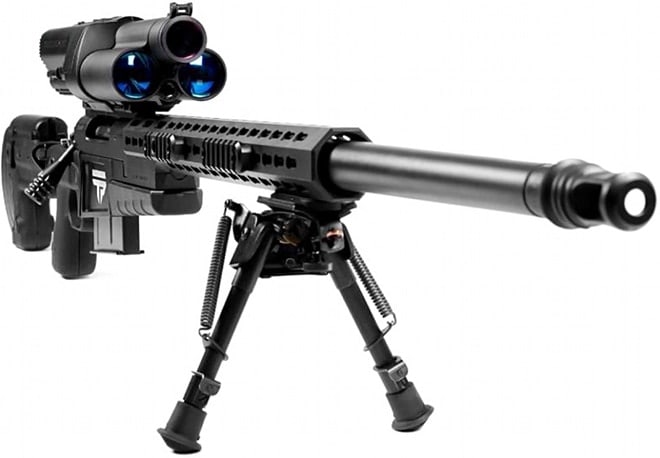 Despite its (slightly) more modest appearance, the XS4 is every bit as much of a shooter as the XS1 with a fantastic 1,200-yard range shooting the powerful .338 Lapua Magnum cartridge.

This latest PGR works exactly like its predecessors. Inside the scope is a small heads-up display (HUD) that relays video taken by the scope’s 6-35x digital camera, along with information from the scope’s sensors.

The shooter first identifies his or her target through the riflescope, then “tags” the target by pressing a button on the trigger guard. The scope then corrects for the bullet’s flight path by shifting the image displayed on the HUD. The shooter then brings the rifle back up to the target and pulls the trigger.

This is where things get interesting. In “Advanced” mode, pulling the trigger is no different than flicking off a safety. Until the rifle is held perfectly, lining up the shot without any chance of error, the gun will not fire. Only once the shooter gets the rifle into the perfect position will the PGR fire, ensuring the best possible shot.

TrackingPoint’s PGRs also have a “Traditional” mode where they essentially operate like a traditional rifle.

These guns are primarily targeted to the long-range big-game market, although many law enforcement agencies as well as military units have also shown interest in PGRs. Precision Guided Rifles are for people who can’t afford to miss.

The prices reflect that. Although TrackingPoint has not yet revealed the XS4’s price tag, if it’s like the other rifles it will cost around $25,000. You do get a fine rifle for the money, you can be sure of that. The TrackingPoint XS4 is built with a 27-inch Krieger barrel, magnum Surgeon action and McMillan A5 adjustable stock. The stock can be lengthened or shortened with the use of spacers.

Each rifle comes with a Pelican 3300 hard case, three batteries and two chargers (one wall, one vehicle), 200 rounds of ammo loaded specifically for the rifle, a complete cleaning kit and an iPad Mini that can be linked wireless to the scope for spotting and recording.

If you’re interesting in this latest model of TrackingPoint rifle, you can apply to purchase one through the TrackingPoint store.