Most gun laws passed since Sandy Hook have loosened restrictions 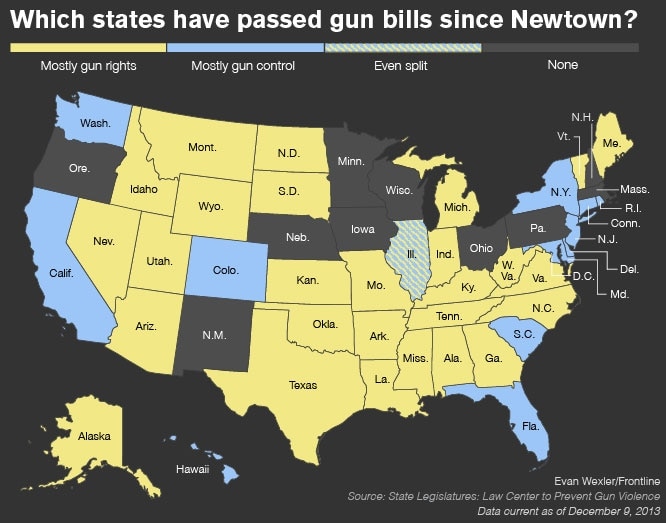 It’s been almost a year since the tragedy at Sandy Hook Elementary in Newtown, Connecticut. In that time about 1,500 gun bills have been introduced in nearly every state across the country, but according to The New York Times, although just over 100 have become law, two-thirds of those have actually loosened restrictions rather than tightened them.

In the weeks and months following the Newtown tragedy both gun-rights advocates and gun-control groups rallied for what they each thought would make our country – and more importantly, our children – safer. Both sides had very distinctive yet very different ideas of achieving this, but in the end, the gun rights advocates prevailed – at least for now.

The 1,500 gun bills introduced in the last year have been rightly divided approximately down the middle with about half being for tighter gun control and half being against it. Only about 12 percent – 178 – of those bills made it through one chamber of the state legislator. And of those, about two-thirds – 109 – were passed into law. Seventy of those laws amplified gun rights and 39 increased gun control. In addition, 13 gun-control bills and six which loosened restrictions were vetoed.

While proposed gun legislation in some states – such as New York and California – have dominated national headlines, 40 states have in fact passed gun laws in the last year. The majority of new laws focus on guidelines for gun permits, followed by public carry and mental health.

The New York Times makes a clear distinction between the political affiliation of states which have passed either stricter gun laws – Democratically controlled – and those which have passed looser gun laws – Republican controlled. However, Frontline points out that gun-rights advocates are significantly outspending gun-control groups in an effort to sway Congress.

But not everyone agrees that the gun rights victory can be pinpointed to either political affiliations or finances.

“As upset as people who don’t own guns are about the misuse of guns — and of course gun owners are too — at the end of the day, they aren’t going to vote for or against you on the basis of what you do on this issue,” explained Richard Feldman, president of the Independent Firearms Owners Association. “Gun owners are going to vote, and they care deeply about this issue.”

But according to The Brady Campaign to Prevent Gun Violence, they “really won this year,” despite the fact that so little of the proposed gun-control legislation was actually passed into law.

Regardless, they still believe their movement is just beginning to gain momentum and will soon catch up with their opposition despite a recent CNN poll indicating that support for gun control efforts has declined. 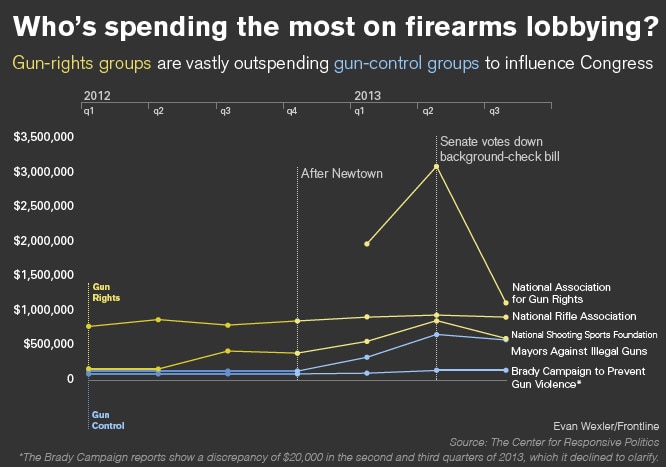 “A year ago, not only were we swimming against the tide, there wasn’t much hope at all that people felt in terms of passing laws that would actually save lives,” said Dan Gross, president of The Brady Campaign.

“We’re on the right trajectory,” he explained. “Every day that we wake up, we’re focused on continuing that momentum that we’ve established, with grassroots organizing across the country, new levels of membership, and funding that this issue hasn’t seen in years. It all is headed in the right direction.”

Director of Mayors Against Illegal Guns, Mark Glaze echoes Gross’ thoughts, “It will take us awhile to match what the NRA has accomplished in two decades, but I think it’s happening a lot faster than anyone thought it would.”