Mark Kelly on progress since Newtown: 'Children are not safer in their schools' (VIDEO) 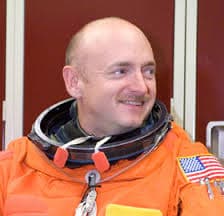 As the one-year anniversary of the mass shooting at Sandy Hook Elementary School in Newtown, Connecticut, approaches, gun-control advocates are hitting the media airwaves discussing the progress or lack thereof they’ve made over the past year.

Vocal gun-control supporter Mark Kelly, the husband of former Congresswoman Gabrielle Giffords, who was shot in the head at a political gathering near Tucson in 2011, appeared on CNN to discuss what’s changed legislatively since 20 first graders and six staff members were murdered on Dec. 14, 2012.

“Well, you know, Saturday will be a year, and so far the national response to that horrific act and the situation we have in this country is basically to do nothing,” Kelly told CNN’s Wolf Blitzer. “So I would say that children are not safer in their schools.”

Kelly, a former astronaut who now runs Americans for Responsible Solutions, a pro-gun control Super PAC, also appeared on NPR’s Here & Now where he gave a more nuanced answer, admitting that at the state level there has been measurable progress.

“…The response at the national level from Congress, so far, has been to do pretty much nothing. And that’s a problem,” Kelly said.

“But fortunately around statehouses, there has been some action on updating and improving gun violence laws,” he continued. “So we are making some progress there, and we continue to work with our representatives in Washington, D.C., and over time, we are hopeful that we can get something done.”

At the top of Kelly’s agenda is to pass an expanded background check law, one that would require criminal background checks for all private transfers, including those made via the Internet and at gun shows.

“Since 1999, two million people — two million — have been stopped from buying a gun at a federally licensed firearm dealer because they did not pass a background check,” Kelly explained. “Now why do we give those people the opportunity to go to a gun show and go to the Internet or private sale to buy a firearm?”

Kelly also cited poll numbers that indicate background checks for all gun purchases are widely popular amongst the American public.

However, former GOP Congressman Asa Hutchinson, who also appeared on CNN, disagreed with Kelly that children are not safer today than they were a year ago and that strengthening gun laws is the answer to reducing gun violence and preventing future mass shootings.

“Virtually every state has looked at school safety legislation and has it introduced,” said Hutchinson, who spearheaded the National Rifle Association’s School Shield Emergency Response Program.

“You’ve had schools employ additional resources in terms of school resource officers and other protection for the children,” he continued. “They’ve increased technology as well so there is a safer response capability.”

Hutchinson also mentioned the fact that federal lawmakers failed to pass several gun control laws back in April, including an expanded background check bill, a ban on so-called ‘assault weapons’ and a ban on magazines that hold more than 10 rounds of ammunition.

“But we certainly have learned that Congress said, despite a full court press by the President, that the answer is not gun control legislation,” Hutchinson said.

Looking ahead, and despite the defeat in the Spring, Kelly said he and his wife are resolved to keep on fighting.