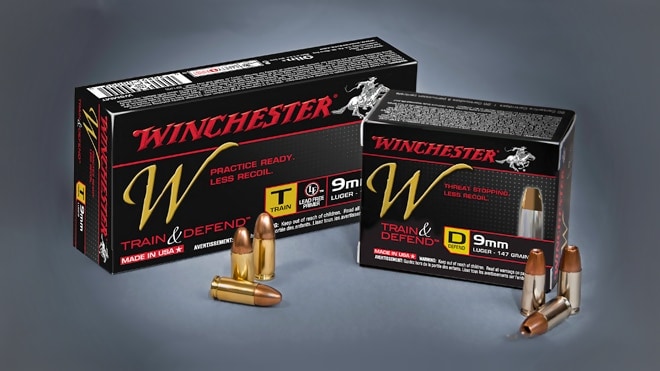 Winchester is gearing up to launch a new line of matched training and self-defense ammo specifically for new shooters. The new loads, called Train & Defend, are loaded to the same specifications so that users can practice with an inexpensive load that performs identically to the self-defense load.

They will offer eight loads initially for .380 ACP, .38 Special, 9mm Parabellum and .40 S&W, with one full metal jacket and one jacketed hollow-point load for each caliber.

The Train & Defend ammo uses reduced-power loads to lessen the felt recoil for beginning shooter while still offering solid terminal ballistics for the self-defense cartridges and is being marketed with an eye towards women.

“The influx of new female shooters to the shooting sports category is significant and we are committed to making their experiences positive when it comes to selecting the appropriate gear, which includes ammunition,” said Winchester V.P. Brett Flaugher in a press release. “After an extensive amount of research, we believe this line of quality products will serve a community of new shooters and others who are excited to learn more about target shooting and personal defense, as well as responsible gun ownership.”

The two loads differ in appearance as well as function. The practice ammo uses plain brass cases while the hollow-points are nickel-plated to make them stand apart in addition to the slight advantage in performance nickel-plating offers. Likewise the training ammo packaging is marked with a T while the self-defense ammo is marked with a D.

Winchester will be offering the training ammo in 50-round boxes while the defense ammo will come in 20-round boxes.

Ballistics information for the loads is as follows:

These numbers are the same for both the full-metal jacketed and hollow-point rounds. They’re all sub-sonic rounds for less noise and flash at the muzzle as well and will likely work well with suppressed pistols, too.

For more information about Winchester ammunition head over to their website and for everything else check out their Facebook page.