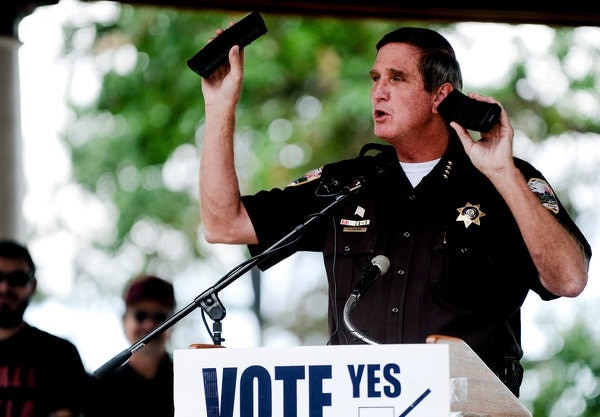 Sheriff Cooke holding up two 30-round magazines. One was purchased before July 1, the other was not. Can you tell the difference? (Photo Credit: AP)

Well, Hickenlooper did sign those measures into law: one that would require criminal background checks for all private transfers or purchases, including those made over the Internet and at gun shows and another that would ban magazines that hold more than 15 rounds of ammo.

Now, as the New York Times recently reported, Cooke is standing by his promise to not enforce those laws. Though, he’s not alone. Fifty-five other sheriffs are following suit.

The rationale for not enforcing the new laws hasn’t changed since March. Cooke and his peers believe that the new laws are (a) unconstitutional and (b) it’s impossible to track whether gun owners are meeting the requirements set forth in the bills.

“How is a deputy or an officer supposed to know which is which?” Cooke asks, while holding up a pre-ban magazine and one that was obtained after the law went into effect.

With respect to universal background checks, Cooke essentially argues that they are pointless, that they’re not going to keep firearms out of the hands of criminals or those who are determined to perpetrate violence.

“Criminals are still going to get their guns,” he told Fox News back in March.

However, a spokesman for the governor believes that, at least with the background check provision, it’s been keeping the wrong people from getting firearms.

“Particularly on background checks, the numbers show the law is working,” said Eric Brown, one of the governor’s spokesman, who cited number from the Colorado Bureau of Investigation that indicate that of the 3,445 checks on private sales since July 1, upwards of 70 people failed the background check and were denied.

Nevertheless, like Cooke, Chaffee County Sheriff W. Pete Palmer doesn’t see enforcing the new laws as a high priority, both because the laws are unpopular and it would likely be a waste of limited resources.

“All law enforcement agencies consider the community standards — what is it that our community wishes us to focus on — and I can tell you our community is not worried one whit about background checks or high-capacity magazines,” he told the New York Times.

Of the small minority of sheriffs who support the new laws or have not explicitly said that they would not enforce them, at least one believes that the Cooke and company are abdicating their responsibilities.

Looking ahead, there are lawsuits in the works to challenge the constitutionality of the new gun laws. There was one that was sponsored by 55 of the 62 sheriffs, however a judge ruled back in July that as a group of law enforcement officers they didn’t have standing — or a warranted reason — to sue the state.