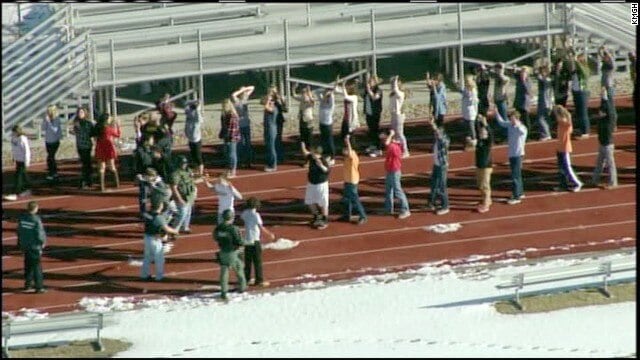 Authorities stated that lessons learned from Columbine and other school shootings helped them to plan and initiate an effective plan in the event of an active shooter situation. (Photo credit: CNN)

A teen armed with a shotgun, a machete and Molotov cocktails entered a Centennial, Colorado, high school Friday afternoon with “evil intent.” Although one student was critically shot, according to Arapahoe County Sheriff Grayson Robinson, the ordeal could have ended much worse if it wasn’t for the presence of an armed school resource officer.

Karl Pierson entered Arapahoe High School about 12:30 p.m. with “no effort to conceal the fact that he was armed,” Robinson said. The boy shot 17-year-old Claire Davis point blank in the head as he made his way to the school’s library, apparently looking for the school librarian, Tracy Murphy, who had some sort of confrontation with the teen in September.

Pierson had fired a total of five shots and set part of the library on fire with a Molotov cocktail before he fatally shot himself.

“He heard the noise of gunshot and, when many would run away from it, he ran toward it to make other people safe,” Robinson added, referring to the resource officer.

Robinson also said of Pierson, “His intent was evil, and his evil intent was to harm multiple individuals.”

Murphy escaped without injury before Pierson ever even entered the library. The teen had entered the school asking for Murphy by name, but the librarian left the area as soon as the threat was discovered, apparently in an effort to “encourage the shooter to also leave the school.”

“He knew he was the target,” Robinson said.

Initial reports indicated that two students had been shot. It was later discovered that the second perceived victim was not injured, but rather covered in Claire’s blood.

Claire remains in a coma at a local hospital, in critical condition.  Her family and friends asking for prayers as she fights for her life.

Robinson said that authorities do not believe that the teen was acquainted with Claire. It’s likely that she “was simply in the wrong place at the wrong time,” he said.

The entire incident lasted less than two minutes and the majority of it was caught on the school’s surveillance video. Authorities believe that Pierson acted alone.