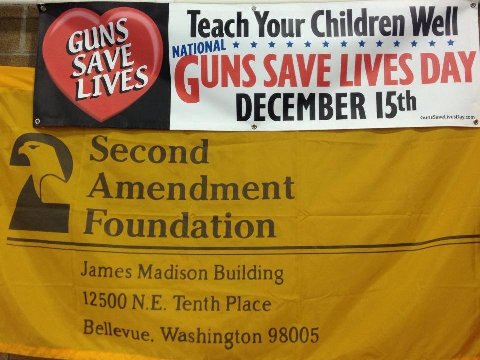 This past Sunday was “Guns Save Lives Day,” a nationwide event designed to counter “the anticipated push by the gun prohibition lobby to exploit the anniversary of the Newtown tragedy to push their political agenda.”

“From all indications there was overwhelming support from firearms owners across the landscape,” Gottlieb said in a press release. “While anti-gunners shamelessly exploited Saturday’s somber anniversary of the Newtown tragedy, Sunday’s activities and weekend attendance at gun shows demonstrated that America is a resilient nation, and that its people understand the difference between extremist, agenda-driven ideology and common sense.”

In addition to the 700,000 estimated attendants on Sunday, upwards of 90,000 people signed an online, pro-gun rights petition and another 46,000 voted in an opinion poll supporting one’s right to keep and bear arms for self-defense from violent crime.

An appreciative Gottlieb thanked all those grassroots, gun-rights organizations that helped make it a tremendous and unforgettable day.

“We want to thank all of the sponsoring organizations that supported this event,” Gottlieb said. “They are too numerous to mention all of them …”