Chicken plant robbery goes wrong… for the suspects, that is (VIDEO) 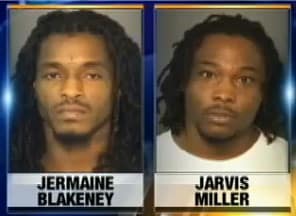 The two suspects both had prior criminal records. (Photo credit: WSOCTV)

An attempted robbery early Friday morning outside a chicken plant in Monroe, North Carolina, didn’t go as planned when the victim turned the tables on the two armed suspects and shot them both.

Terry Campbell had just finished working an overnight shift at Tyson Foods and walked to his car just after 5 a.m., WSOCTV reported. While sitting in his car, he was approached by two armed men who opened the door and preceded to pistol whip him in the face. Authorities believe that the suspects were attempting to rob him.

However, Campbell was one man who wasn’t about to chicken out and become a victim, and what the suspects didn’t know was that their intended victim was armed as well.

While continuing to get hit in the face with the butt of a handgun, Campbell was able to grab his own gun. He then fired several rounds at the unsuspecting suspects, hitting them both and causing the one to drop his gun and run away. Campbell grabbed the man’s gun and drove off.

Campbell then stopped at a nearby gas station and called the police.  He explained what had happened and asked what he needed to do.

The police found the two suspects, identified as Jarvis Miller and Jermaine Blakeney. One was shot several times and the other was shot once in the groin area. The two suspects were taken to a local hospital where they are said to be recovering. Once released they will both face criminal charges.

Campbell spent several hours talking with authorities following the incident while his family anxiously awaited his release later that morning.

Campbell did not wish to appear on camera and the extent of his injuries is unknown.

Authorities say that Campbell will not face any charges, as he acted in self-defense.