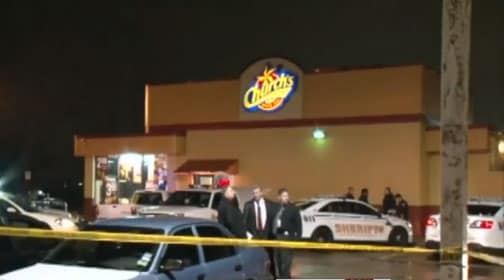 Apparently the three men were after more than just some late-night chicken and biscuits. (Photo credit: Click 2 Houston)

When three men entered a Church’s Chicken in Houston Friday night they were armed and had a big appetite – an appetite for some easy money, that is. But the tumultuous trio’s plan fell through when the pistol-packing manager fatally shot one of the suspects, sending the other two running like a couple of scared chickens.

It was about 8:30 p.m., according to KHOU, when the three men entered the restaurant and demanded money from the employees. The suspects were all wearing masks and two of them were armed with handguns. The two armed suspects stood at the door, while the third suspect went behind the counter to grab some quick cash.

However, when the suspect came behind the counter instead of being greeted with an open cash register, he was staring down the barrel of the manager’s gun.

“They had their faces covered and were wearing hoodies,” said Robert Surgeon with Harris County Sheriff’s Office. “One suspect ran behind counter, other two had firearms. The manager of Church’s Chicken produced his own firearm and shot one of the suspects, leaving him deceased at the scene.”

The other two suspects immediately ran away empty handed.

When police arrived, the third suspect, who has not yet been publicly identified, was pronounced dead at the scene.

Other than the one suspect, nobody else was injured during the attempted robbery, which was also the second chicken-related botched robbery this week. Authorities continue to search for the other two suspects, although no description was given, and they stated that the restaurant manager will not face any charges for shooting the would-be robber.

Apparently there has been a string of fast food robberies in the area, including two McDonald’s restaurants that were robbed just this week. However, authorities stated that they are unsure at this point whether the robberies are related.