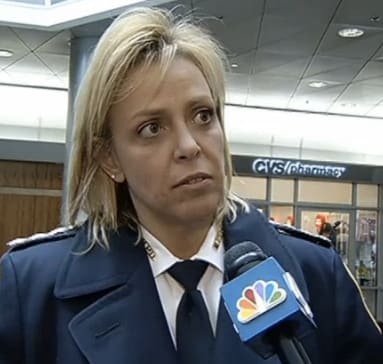 D.C. Police Chief Cathy Lanier explains that gun owners will have to re-register their firearms every 3 years.

Starting Jan. 1, D.C. gun owners who purchased a firearm between 1976 and 2010 will have 90 days to re-register their firearm with district police.

Failure to re-register one’s firearm may result in fines ranging from $13 to $1,000 and jail time of up to one year, according to Gwen Crump a spokesperson for the Metropolitan Police Department.

“A person who fails to renew their firearms registration within 90 days of the deadline (meaning, 90 day renewal period + 90 day grace period = 180 days total) will have their firearm registration canceled, will be in possession of an unregistered firearm, and may face criminal charges punishable by a fine up to $1,000 or 1 year in jail, or both,” Crump wrote in an email to a local NBC News affiliate.

Re-registering one’s firearm is not a walk in the park, as Washington Times Opinion Editor Emily Miller noted in a recent article:

“To avoid becoming a felon, anyone with a gun registered before 2011 will have to go to police headquarters to be fingerprinted, photographed, provide proof of address, pay a fee and confirm they may still legally possess the firearm,” Miller wrote back in November.

“The Firearms Registration Section will then create a new registration certificate — now in the form of an ID card — for each gun,” Miller continued.

Plus, re-registering is not a one-and-done proposition. Gun owners must do it every three years, though they’ll have the benefit of doing it online following the initial in-person ordeal.

“Every three years, you’ll have confirm you still live in the district and you still have your firearm.” D.C. Police Chief Cathy Lanier said.

“After the first re-registration, it will be done online or by mail you won’t ever have to come in again,” she added.

Naturally, gun-rights advocates are miffed by the re-registration requirement, not only for the headaches it’s bound to cause but because, as mentioned, it has the potential to turn unsuspecting gun owners into criminals.

“Of the 50,000 or however many people there are, at least one person won’t comply,” said Ilya Shapiro, a senior fellow at the Cato Institute, the D.C.-based libertarian think tank. “Not willfully but because they haven’t heard about the new law and all of a sudden they’ll be in technical violation of the law which has serious penalties.”

There is hope though for D.C. gun owners. Dick Heller, the lead plaintiff in the 2008 case, District of Columbia v. Heller, which overturned the district’s ban on handguns, has filed another lawsuit with the help of his attorneys arguing that new registration requirement violates one’s constitutional rights to keep and bear arms.

“These burdensome requirements appear calculated to discourage persons from registering firearms at all and, for those who do so, to snare them with expiration and re-registration deadlines that, if missed, would turn them into criminals,” states the 50-page brief that was filed in U.S. District Court for the District of Columbia last week.

Heller is asking judge James E. Boasberg for summary judgment on the matter, hoping that he’ll rule in favor of Heller and block the law from taking effect.

“What’s the point?” Heller asked of the registration requirement in an interview with Miller. “Will that make the bad guys come down and register? Nope, just the law-abiding.”