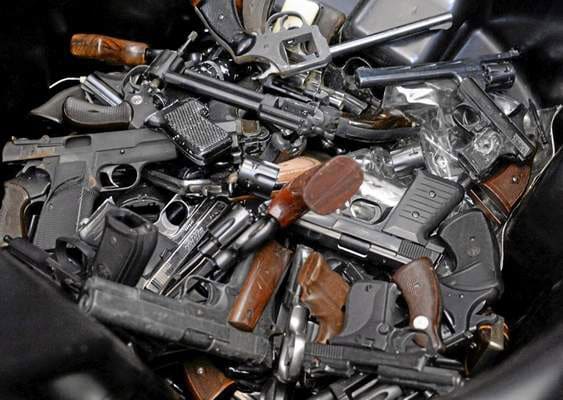 In an effort to make the streets a bit safer, the Los Angeles Police Department collected more than 1,000 firearms Saturday during a gun buyback which was held simultaneously at three separate locations. Participants received grocery gift cards in exchange for their guns.

“It is anonymous, no questions asked,” spokeswoman for the LAPD, Officer Norma Eiseman, told KTLA. “All we’re asking is: Drive on through, turn in your weapon, receive your gift card.”

Handguns, rifles and shotguns were worth $100 gift cards and assault style weapons, as defined by California law, fetched a hefty $200 gift card redeemable at Ralph’s.

The event was organized by Mayor Eric Garcetti’s Gang Reduction and Youth Development Office and was the city’s seventh gun buyback. Altogether, the buybacks have yielded over 12,000 firearms since 2009.

“The goal is to take these guns off the street and make sure they don’t fall into the hands of criminals or children,” Garcetti said in a statement.

“This is a great way to get unwanted guns off the street,” head of the LAPD’s gun unit, Detective Rick Tompkins added. “For the most part, the people who turn them in don’t want them, or can’t take care of them, and eventually unwanted guns will end up in the wrong hands.”

Tompkins also pointed out that some of the guns that are turned in were given to the owners by someone else, maybe an older family member, and they have no desire to keep them around – like an M1 Garand turned over in Van Nuys. “That weapon probably wasn’t being used on the street,” Tompkins admitted, but the owner just simply did not want the antique rifle which could have possibly been used in World War II.

But not all of the firearms collected at the gun buybacks were antique artifacts that would make avid collectors cringe. The majority of the guns received were handguns and shotguns.

Leaonard Stone of Elysian Park traded two revolvers in exchange for $200 in grocery gift cards. But he admits that it wasn’t about the money. “If somebody broke into the house or something, they could get those guns and use them for some type of criminal activity,” he said. “Therefore, I felt it was better, in the long run, to give these guns up.”

But some argue that the guns turned in are rarely used by criminals and that the buybacks are ineffective at reducing street crime.

Nonetheless, many cities across the country continue to organize the buybacks – sometimes with competition – and participants continue to roll in and collect gift cards or other incentives.

However, Tompkins stated that in the LA area they have seen a recent decline in participants. “But maybe that’s a good thing,” he said. “Maybe we’re reaching the bottom of the barrel.”

After checking to ensure that they aren’t stolen, the guns collected from the buybacks are melted down.