After leading police on a chase for nearly an hour, 51-year-old Brian Newt Beaird smashed his Corvette into another vehicle in the middle of an intersection. Beaird abandoned his badly damaged car and fled on foot. Moments later, he police shot him, L.A. Times reports.

An investigation is underway to determine if any less-than-lethal munitions were deployed before officers resorted to gunfire. Some believe the sound of a bean bag round from a shotgun may have triggered sympathetic fire – or reflexive shooting — from other officers. But Los Angeles Police Department Chief Charlie Beck said Monday that it was too early “to draw those kind of conclusions.”

“Right now that kind of stuff is speculation, speculation isn’t always wrong. … We will work through this,” Beck said. “It is important for the public to know we investigate shootings more thoroughly than any entity in the nation.”

Beck said he reserves judgment, noting what the officers witnessed on the ground was likely different than what the helicopter saw from nearly 1,200 feet in the air. 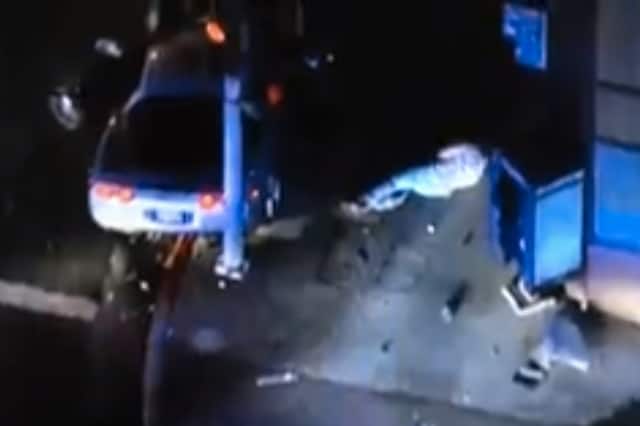 Several small objects can be seen bouncing across the pavement at nearly the same moment Beaird falls to the ground. These may be less-than-lethal projectiles.

The police chief also stated the department’s policy to announce the deployment of less-than-lethal munitions is meant to minimize sympathetic fire.

“Before an officer discharges the bean bag, the protocol is to loudly state, “Bean bag ready, bean bag ready,’ so everyone knows the detonation heard is not a gunshot.”

“These are tough instances,” he continued. “It is difficult to do them perfectly in the haste of the moment.”