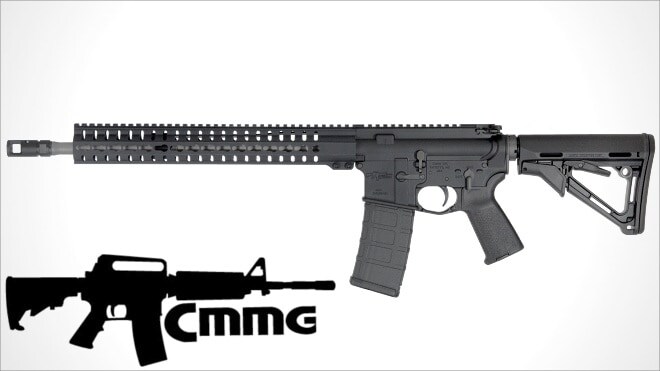 With the black rifle crunch fading into the sunset, manufacturers are finally free to introduce and develop new rifles, no longer having to solely focus on filling backorders and waiting for critical parts. And now CMMG is announcing a new series of rifles and AR-15 uppers, the Mk4 RCE, or Recce rifle.

The Mk4 RCE follows the Recce rifle pattern. It is a carbine-length rifle with a full-length modular free-floating KeyMod hardguard housing a mid-length gas system.

Although it is “optics-ready,” meaning it ships without an optic or iron sights, everything else is top-shelf. The Mk4 RCE is a semi-custom design that comes loaded with premium parts. And frankly, optics are a personal choice; many people are likely to change or discard most factory sight setups in favor of their preferred configuration. Shipping optics-ready parts saves the end user a little money in the long run.

The Mk4 RCE follows in the footsteps of the recently-announced Mk3 CBR, which is a carbine-length AR-10-style rifle chambered for .308 Winchester/7.62 NATO. Unlike the full-house Mk3 CBR, the Mk4 RCE will be chambered for more common .223 Remington/5.56 NATO or the increasingly popular 300 AAC Blackout.

Both the upper and lower receivers of the Mk4 RCE are made from forged 7075-T6 aircraft aluminum, which is considerably stronger than 6061-series aluminum which is common to entry-level rifles.

The uppers are completed with 16-inch 416 stainless steel barrels with a hardened nitride finish. At the end of the barrel is CMMG’s custom muzzle brake that promises solid recoil mitigation and long-lasting performance with its 4140 steel construction. The muzzle device also sports a tough nitride finish.

Wrapping things up in terms of accessories, the Mk4 RCE include a good spread of Magpul parts, including a MOE CTR adjustable buttstock and pistol grip and Magpul PMAG 30-round magazine. The Mk4 RCE also comes with a high-end trigger, a Geissele Automatics SSA 2-stage fire control group.

The rifle weighs just 6.5 pounds unloaded and 7.5 pounds with a topped-off magazine. It measures in at 33 inches with the stock collapsed and just over 36 inches with it fully extended.

With an MSRP of $1,399, the Mk4 series is highly competitive with other rifles, many of which can’t match it in terms of build quality and premium accessories. As usual, we expect real-world prices to be quite a bit lower.

For those who aren’t interested in purchasing a complete rifle or want one rifle with uppers in both chamberings, CMMG will also be offering the Mk4 RCE as uppers, separately. Both the .223/5.56 and .300 BLK uppers will be approachably priced at $849.

We will expect to see more information about the Mk4 RCE at SHOT Show next January.

They will of course be protected by CMMG’s lifetime guarantee. For more information about CMMG, head over to the company website.