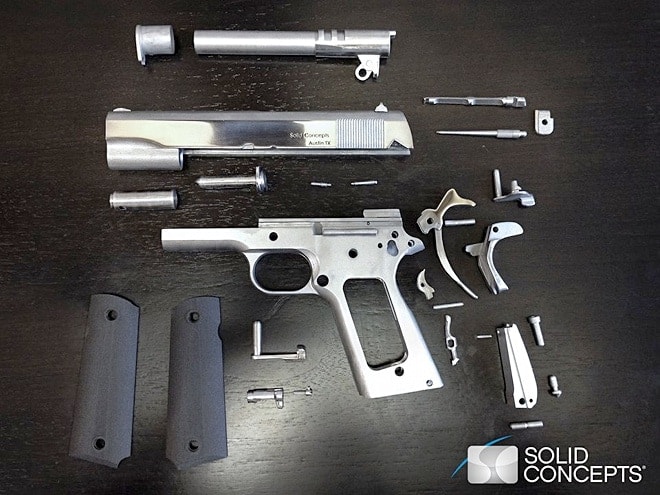 Solid Concepts simultaneously blew up the worlds of 3D printing and firearms with their November announcement that they had successfully 3D-printed a full-size, stainless steel Model 1911 .45.

Even though it was just a proof-of-concept, they’ve run over a thousand rounds of ammunition to show that a 3D-printed firearm could withstand the pressures of full-power centerfire ammunition. Now they’re ready to take things to the next level with a special limited-edition run of 100 1911s.

“John Moses Browning was a visionary himself, compelled to advance the firearms of the United States armed forces back in 1906 when the handgun was first held up for adoption into the Army,” explained Solid Concepts spokeswoman Alyssa Parkinson on the company blog.

“After testing from 1907 to 1911, and 6,000 rounds through his prototype .45 caliber pistol, Browning’s gun was adopted and dubbed the Colt Model 1911. This model has been through its fair share of wars and has become a staple in many a gun collector’s home. We’re happy to pay tribute to Browning with our limited edition very first 3D Printed metal 1911s.”

But you’d better be prepared to spend a cubic foot of money for one of these history-defining firearms. The process Solid Concepts uses, direct metal laser sintering, or DMLS, is one of the most expensive methods of 3D printing.

Each limited-edition Solid Concepts will run $11,900.

Given the costs of DMLS printing it isn’t clear if and how much of a profit Solid Concepts is making off of these guns. Realistically, it’s not important. With just 100 of these ground-breaking firearms in existence, it’s safe to say that they will remain treasured artifacts for generations to come.

The limited-edition 1911s are slightly different than the prototype. In addition to using stainless steel the 100 will also use Inconel for some parts. Inconel is harder and stronger than steel to the point where it’s almost impossible to work with using traditional machining processes.

In addition to the small tweaks, anyone who orders a Solid Concepts limited-edition 1911 will have the option to customize it to their preferences. Although that would be as expected in the traditional custom gun world, especially for $11,900.

“Post-machining and hand-polishing will complete the manufacturing process and each assembled pistol will undergo 100 rounds of test firing,” added Parkinson. “We are offering buyers the chance to tour our Texas facility and watch their gun being printed with the added benefit of joining our lead additive manufacturing engineers on the range for the first test firing of the buyers’ limited 1911 gun.”

Each pistol will ship with a wooden showcase box complete with a 3D-printed metal plaque and signed certificate of authenticity. “This is a chance to own a piece of history,” said Scott McGowan, Solid Concepts V.P.

These guns really are making history, and quickly. In just a few short years 3D printing has gone from science fiction to service pistol, and while the first firearms to roll off the line are downright exotic, they herald a shift in how guns are made.

Solid Concepts has contributed a lot to the worlds of manufacturing and firearms. And they know it, too.