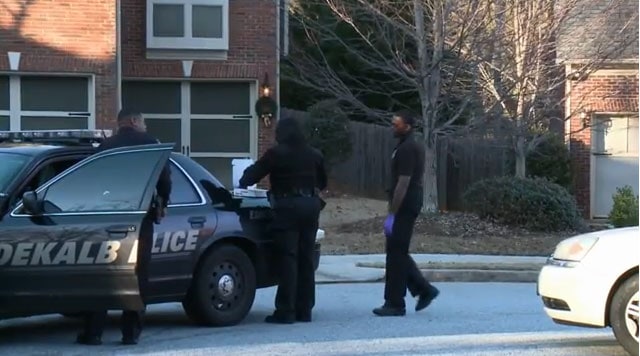 A Georgia homeowner shot one of three burglars who had broken into his Decatur home Monday afternoon during broad daylight.

The man, who has not been publically identified, was coming home on his lunch break when he got a call from his alarm company warning of a possible break-in, a local NBC affiliate reported. When the man got home, he went to the back of the house and could see three men inside. He immediately called 911.

But while he was still on the phone with the 911 dispatcher, the three men came out of the house. Rather than taking off, the trio came towards the man. But what the men didn’t know was that the homeowner was armed and, apparently feeling threatened by the suspects, pulled out his gun and fired it.

One of the suspects was struck by the gunfire, but the other two ran off. The injured suspect was later found in the area suffering from a non-fatal gunshot wound. He was transported to a local hospital where he was being treated for his injury.

Police are still searching for the other two suspects, but no description was provided.

Authorities did not indicate whether the suspects got away with any of the homeowner’s belongings, but did confirm that the house had been ransacked.

To make matters worse, the homeowner had likely finished cleaning up his home from another break-in which had occurred just five days prior. Police did not indicate whether they believed the two break-ins were related.

The homeowner was not injured during the ordeal and police stated that it does not appear that he broke any laws and will likely not face any charges.

It is unknown if the homeowner possessed a valid concealed weapons license. However, in the state of Georgia, it is legal to carry a gun in one’s car and on one’s property without a license, so even if he did not have a license he was still in legal possession of his firearm.

The homeowner did not wish to appear on camera or talk with reporters, but his neighbors are applauding his actions, saying he did nothing wrong and showing concern about what seems to be a recent rise in crime in the area.

Keith Dennard, who a few months ago moved into the house across the street from where the burglary occurred, told reporters that he’s “disturbed” by the break-ins in the seemingly nice neighborhood.

“I guess I need to secure my house more and go out and purchase a gun for protection,” Dennard said.

And as for his neighbor, “I feel like he did the right thing,” Dennard added. “If somebody was in his house he doesn’t know exactly what they might try to do to him so he’s got to protect his own house.”