The results of the scientific poll, conducted by McKeon & Associates Nov. 6-7, indicate that only four out of ten Americans support extending background checks to private transfers between buyers and sellers at gun shows.

To explicate, after being informed that all gun shop dealers or Federal Firearm Licensees attending gun shows already have to perform background checks under federal law, it’s only those transfers/sales made between private individuals that do not require background checks, 40 percent of the 1,200 respondents agreed that extending background checks to those private transfers are necessary.

Meanwhile, 53 percent of respondents said it was not necessary to extend background checks to private transfers at gun shows and 7 percent said they did not know whether it was necessary. 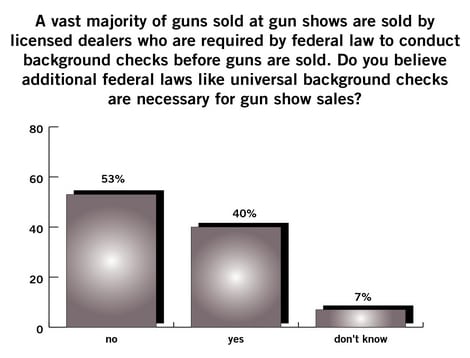 “We commissioned this poll to help determine where Americans stood on the various aspects of how the NICS system actually works today,” said Larry G. Keane, NSSF senior vice president and general counsel, in a press release.

“When properly informed of relevant details, it turns out that only four out of ten, not nine out of ten Americans support so-called ‘universal background checks’ at gun shows or for firearms transfers,” Keane continued, referencing Gallup surveys and other polls taken in the wake of mass shooting at Sandy Hook Elementary School in Newtown, Connecticut, that found overwhelming support for a federal law that would require background for all gun sales, including private transfers made over the internet and at gun shows.

Keane also noted the high level of support for the NSSF’s FixNICS campaign, which encourages all states to report records of prohibited persons, specifically mental health records, to the FBI’s National Instant Criminal Background Check System (NICS). Currently, not all states are submitting relevant data into the system, which leaves gaping holes in the database. 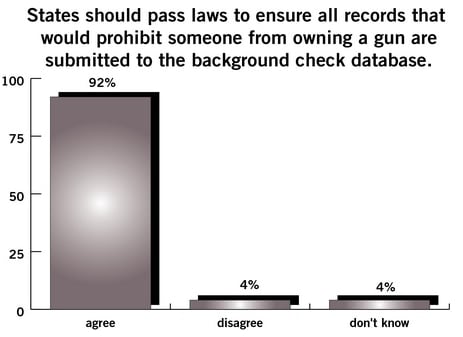 Question regarding the NSSF’s FixNICS campaign

According to the poll, 92 percent of Americans believe that states should submit all records of persons federally prohibited from owning a firearm to NICS, even if that requires passing legislation. Moreover, a combined 74 percent margin said that running background checks against a database that does not have all the relevant information was “not effective at all” or “not very effective.”

In other words, a majority of Americans agree that NICS is only as good as the data it has in it. 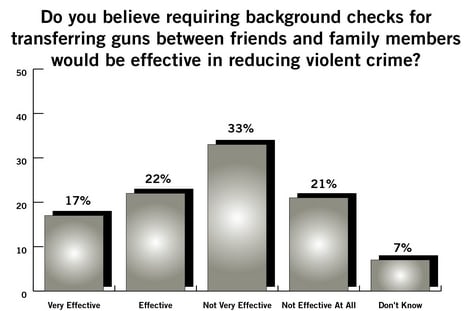 This is an interesting poll. The results suggest that UBCs are not as popular as gun-control advocates or the mainstream media make them out to be. Again, Gallup surveys said support for UBCs was as high as 90 percent.

So, what explains the difference in results? Well, two things: (a) how the questions are worded and (b) how much information the respondents have when answering the questions.

The NSSF poll gave the respondents more contextual details, informing them that a vast majority of guns sold at gun shows are sold by FFLs who do background checks. This is true. And it’s something that’s frequently omitted from the other polls.

However, as detailed as the NSSF poll is, it also leaves out relevant information or fails to address certain questions. For example, a big part of the UBC push is to cover gun sales made over the Internet between strangers — not friends and family. There is no federal law that requires background checks between private buyers and sellers who conduct business via the Internet (though, there is an exception if the buyer and seller are from different states, then the transaction has to be made via an FFL).

So, another question that should be addressed is whether the public supports background checks for gun sales made between two residents from the same state, who don’t know each other and who meet over the Internet.

It would be interesting to see what the results of this question would be.