What's Santa packing on his sleigh?

It is a legitimate concern.  You pack up the sleigh with millions of dollars in merchandise and chart a course that will cover billions of miles.   You will conceivably face all kinds of inclement weather and varied terrain. Your travels will take you into some rough neighborhoods, and you may well have to trespass in order to get the job done.

What would you choose?  Carrying a gun is all about expecting the unexpected.  For a fat man in a sleigh, it could be as simple as needing to put down a defective reindeer.  Or it might be someone from the naughty list disgruntled about a well deserved designation looking to settle a score. 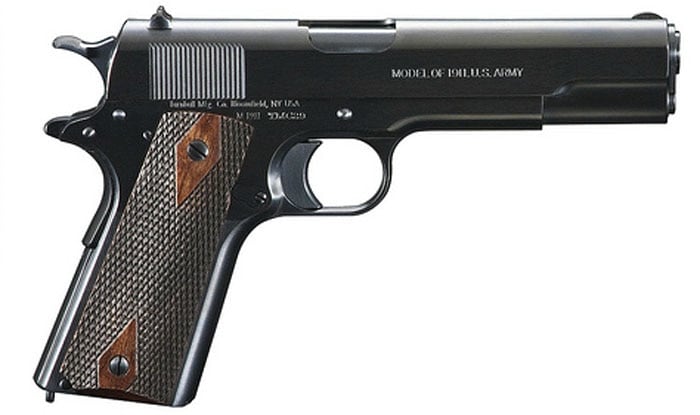 You’d think Santa would prefer concealed carry.  You rarely see old Kris Kringle packing heat.  There must be an ankle rig tucked up inside the boot.  Or maybe he’s got on a shoulder holster.  With all of the extra bulk on ol’ fatty, I bet he’s got a full sized 1911 tucked under his arm.  Santa is, after all, a traditionalist.  And there’s nothing more traditional that a cold blued 1911.

My bet is that he’d go for the perfect blend of form and function, something like a Turnbull Model 1911.

But he’d have to pull over the sleigh at many state border crossings, lock up the gat, and get back behind the reins starkers.  As hard as the elves have worked for national concealed carry reciprocity, we still have to abide by the rules of land.  What with all of the NORAD coverage of his movements, it is doubtful that Santa would be able to avoid a kerfuffle with the ATF.  After all, they’ve got drones.

Still, I imagine he’d want to silence the .45.  He’s partial to silent nights.  A decent can on the end of a 1911 would have a genuine cinematic appeal, but that’s too sinister for St. Nick.  A good 1911 says you have taste, a touch of class.  A silenced 1911 implies that you have class and are up to something.  Better to let it ring.

So maybe he likes it loud.  As gregarious as Santa is wont to be, I like to think he appreciates subtlety, too.  I bet here’s a pocket watch in one vest pocket, and a baby Browning in the other.

For a while, Santa had been carrying an old Belgian A5.  He kept the gun in a saddle holster there on the sleigh.  Ducks have developed an exceptional ability to spot hunters from below, but not from above.  Santa’s been known to come out of the sun like a Japanese Zero, knock down a couple of Canada geese and head back home a little less empty handed.  But then Browning had to reissue the A5.  Santa’s a bit of a hipster.  The A5 was much cooler when you couldn’t buy one.

Back when a sidearm was as much a sign of manhood as a mustache, Santa sported a matched pair of 1873 Colt single actions.  They looked good on that wide black belt, with the pearl handles forward in a slow, but stylish double cross-draw carry.  But the good folks at the mall of America don’t cotton to open carry, not even if it is Jolly of St. Nick doing the carrying.

The Savage 42 is a must for modern light aviation. (Photo credit: Savage Arms)

No, Santa has to go for subtle.  Utilitarian.  And there’s no better choice for the modern airman than the Savage 42.  The versatility of the .410 round, combined with the timeless .22 LR, Santa has a versatile rifle at his side, makes the 42 a great gun for survival situations.

The gun isn’t threatening, yet the new options available for .410 personal protection make the Savage a rocking self defense gun. 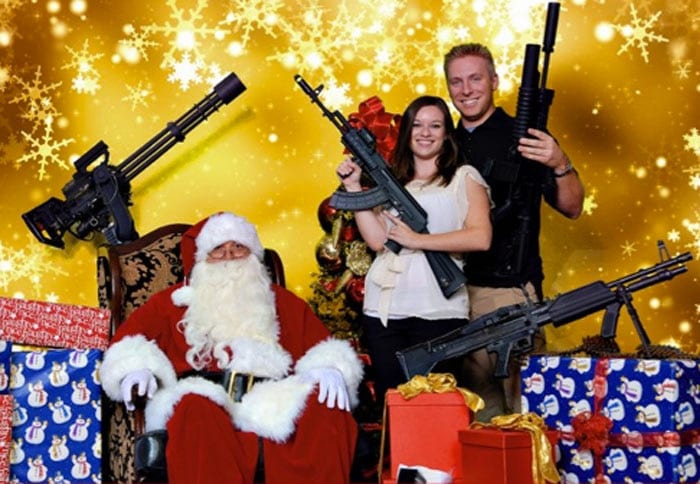 This is going to be a loud Christmas party. (Photo credit: Scottsdale Gun Club)

If you’re curious about St. Nick’s proclivities, you could always ask him in person.  He showed up at the Scottsdale Gun Club for a photo shoot earlier this month, and he brought an arsenal (and maybe an Arsenal, too).  The minigun is a good choice for some of the hostile airspace he has to cross, but the ammo gets weighty.  When you’re sleigh is powered by undersized flying deer, weight is a serious concern.

Regardless of what he’s carrying with him, one thing’s for sure.  Santa has a Posse.  We’re all looking out for the jolly old jelly belly.  Merry Christmas to all, and to all a safe and quiet night.