Yankee Hill Machinery, AR rifle and accessory specialist, is announcing a new rifle for 2014, their first-ever billet AR-15, the Model-57. Chambered for 5.56 NATO (and not FN 5.7x28mm as some might conclude), this is a premium AR with a lot of new parts and features.

The YHM Model-57 is one of Yankee Hill’s new products for 2014 and showcases several of their other upcoming products.

Like most high-end ARs, especially billet ARs, the upper and lower receivers are machined from 7075-T6 aluminum billets. The upper receiver has M4 feed ramps and is laser-engraved with T-marks.

The upper is fit with a 16-inch 4140 steel barrel that’s then heat-treated to a Rockwell hardness of 25-32. Yankee Hill will be offering the upper with a choice of one-in-seven or one-in-nine rates of twist, giving users the option of an choosing a barrel favors lighter or heavier bullets. 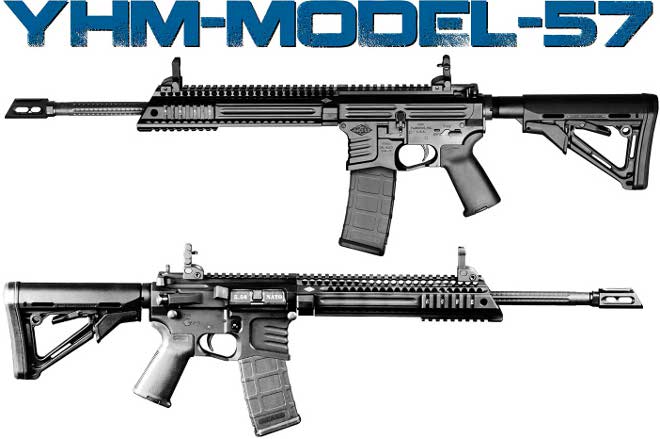 The Model-57 will exclusively feature a new “ball cut” fluting that lightens and dimples the barrel. Fluting adds a level of rigidity and added surface area to barrels, making them more accurate and less prone to thermal expansion.

The rifle has a carbine-length gas system concealed under a “Specter-Length” SLR-Slant handguard and sports the YHM Slant Brake, both new products for 2014. Mounted to the flattop rails is a set of YHM QDS flip-up backup iron sights.

The SLR-Slant handguard is a semi-quad rail, with a full-length 12-o’clock rail but only short sections of rail at the front end of the handguard for accessories at three-, six- and nine-o’clock. This not only cuts on weight but give the user a smoother profile handguard to hang onto. The muzzle end of the hanguard is slanted and longer at the bottom. This style of handguard is increasingly popular with shooters who like a very forward grip.

Finally, the rifle is also built with an oversized “tactical” charging handle and two-stage five-pound trigger. The lower handguard is aggressively textured around the magwell as a sort of forward grip and the magwell is enlarged and flared for fast reloads.

Yankee Hill doesn’t depart from the standard when it comes to furniture, though, and uses a Magpul MOE pistol grip and CTR buttstock and includes two Gen. 2 PMAGs with each rifle.

The only sticking point might be the price, but it would be hard to find any rifle with these features, particularly the barrel fluting, for less. The Model-57 has an MSRP of $2,195. Hopefully real-world prices will come in a bit under $2,000.

Still, if you’re looking for a high-end AR-15 rifle that really stands apart from the pack, give the YHM Model-15 a once-over. More details and information can be found at the product page.

Also, if you’re not interested in the whole rifle, but like some of the new features, like the Slant brake and handguard or the look of the billet receivers, good news, Yankee Hill Machinery will be selling them separately in the coming weeks and months.