If someone told you that you’d be spending your holiday season waiting in long lines you might not really think anything of it. After all, tis the season.

But Connecticut gun owners are finding themselves waiting in long lines not just because of holiday shopping, but also because they need to register their lawfully owned firearms with the state government.

Under the state’s new sweeping gun-control law, passed in the wake of the mass shooting at Sandy Hook Elementary School in Newtown, Connecticut, gun owners have to register so-called ‘assault weapons’ and magazines that hold more than 10 rounds of ammunition by Jan. 1, 2014.

Failure to do so could result in criminal prosecution, including fines and jail time if one is convicted.

Local news station WSFB caught up with gun owners who were waiting outside the Public Safety Building in Middletown on Thursday. None of those interviewed believed that new law would curb gun-related violence or prevent a mass shooting.

“If people are going to do things illegally, they’re not going to be here registering their gun,” Jared Krajewski, who was waiting to register his firearms, told WSFB.

For Scott Boccio, who was also there submitting the registration forms for his firearms, the process raised questions about the constitutionality of the law.

“I understand why they’re doing it, but I don’t think it’s constitutional,” said Boccio. “Unless you change everything, and make it England and take everything away, I don’t see how they’re going to stop it.”

However, at least one gun owner seemed to be alright with the new law, even though like the others he acknowledged that it wouldn’t really be effective at reducing crime.

“If they were trying to make them illegal, I’d have a real issue, but if they want to just know where they are, that’s fine with me,” said Charles Gillette, who was there registering magazines.

For Connecticut State Police the objective is to get people in and out as quickly as possible. To do so, they reminded the gun-owning public to complete the paperwork before arriving to the Public Safety Building.

“People don’t realize the entire form must be filled out completely,” said State Police Lt. Paul Vance. “And if it requires a notary, it should be notarized before coming here. That’s what’s causing the massive line.”

The Public Safety Building is open from 8:30 a.m. to 4:30 p.m. Authorities say its best to get there as early as possible to avoid a long wait.

To check out the registration forms for magazines and ‘assault weapons’ click here. 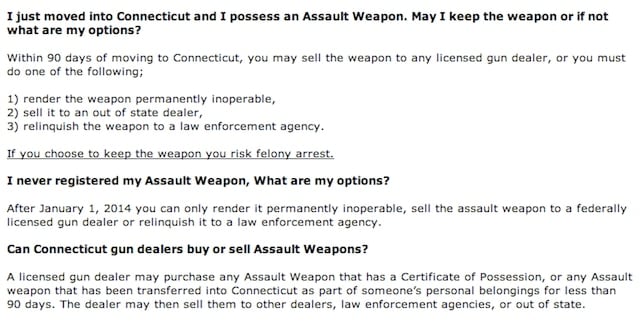 Q&As regarding the new law from Ct.gov.